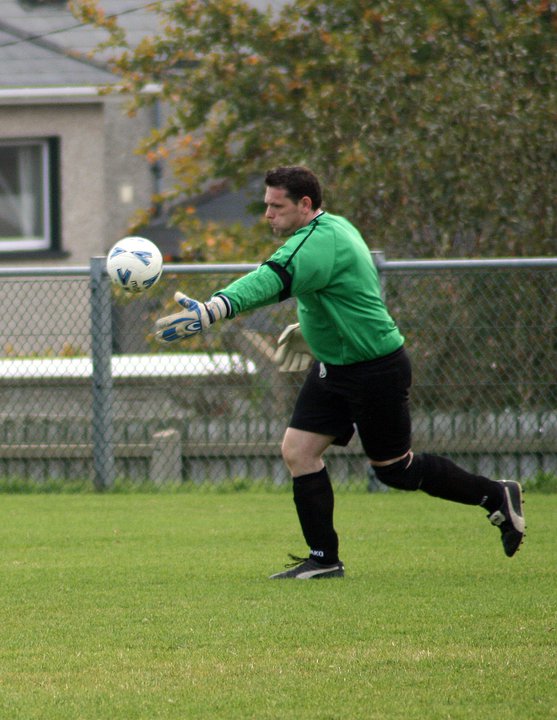 BY ENDA MCELHINNEY: A battling performance from Rathmullan Celtic ensured they came away from Cappry with a share of the spoils and edged the Seasiders one point closer to securing back to back Donegal League titles.
Dessie McLaughlin and Mark Curran’s outfit travelled in anticipation of a tough afternoon from a Cappry team still trying to secure 3rd place and a promotion/relagation playoff for a spot in the Premier Division. They were not to be disappointed as the home side started well, forced themselves into the lead and could have claimed all three points but for a number of excellent saves from Rathmullan stopper Denis Sheridan.

There were few chances in the opening exchanges as both teams tried to gain a foothold on a heavy pitch that looked like it could use a one to one with a lawnmower. The home side made the breakthrough on 20 minutes when the impressive Benny McLaughlin got in behind the Rathmullan rearguard. His initial effort was superbly saved by Sheridan, but the ball broke kindly and McLaughlin slid the ball across goal where it was scrambled over the line.
Rathmullan to their credit responded well to the setback and immediately set about getting back into the game. The midfield four of Ryan Connolly, Seamus McLaughlin, Aaron McClafferty and Eoin Sheridan were scrapping for every ball in tough playing conditions and managed to force a succession of corners and free kicks as Rathmullan upped the ante.

From a free kick on the left hand touchline, Dara Patton swung the ball across the face of goal and as strike partner Eamon Sheridan challenged goalkeeper Gareth Patton the ball appeared to evade both men and found its way into the far corner to the delight of the travelling Rathmullan support that included certain Mother’s giving up their big day in support of the Seasiders bid to make history.

The half ended without either side threatening to claim the lead goal as the game became a midfield battle. The home side emerged with a real spring in their steps and appeared determined to claim maximum points, with the effective Benny McLaughlin causing all sorts of trouble down the left wing for first Barney Patton and his replacement Sean McGregor as Rathmullan came under increasing pressure.

Denis Sheridan once again proved the old adage that a good keeper is worth ten points over a season with three exceptional stops in the second period. The first was a flying finger tip effort to keep a 20-yard pile driver out and the big man then came out on top in another two duels with Cappry forwards. The Monaghan man mountain also claimed a number of corners and crosses as the pressure increased to ensure his goal was not breached a second time.

Despite the incessant pressure from the home side, Rathmullan were able to recover and finish on a high as McGregor and Niall Doherty came on for Barney and Ryan Connolly to change the look of the right hand side. It was a quieter than normal day for front pair Sheridan and Patton and the best chance for a Rathmullan winner came when Eoin Sheridan fired just over from 16 yards.

Sheridan looked at his most effective once moved inside as Paddy Sheridan came on at left wing and the Craig Bull was soon firing his trademark deliveries into the box allowing Dara Patton glance a header into the hands of the waiting keeper.
There was to be no winner and overall a share of the spoils was probably a fair reflection for both sides.

The point means Rathmullan now sit three points ahead of St Catherines with one game in hand and the Killybegs outfit visiting the Flagpole next weekend.

All eyes now turn to that clash, and hopefully a big turnout will come and get behind the team as they look secure a magnificent second successive title winning promotion. Not many get the chance to scale such lofty heights and fewer still can grab it. With one more massive push from the club and town as a whole…there could be a wee party to be had in town in 7 days time.