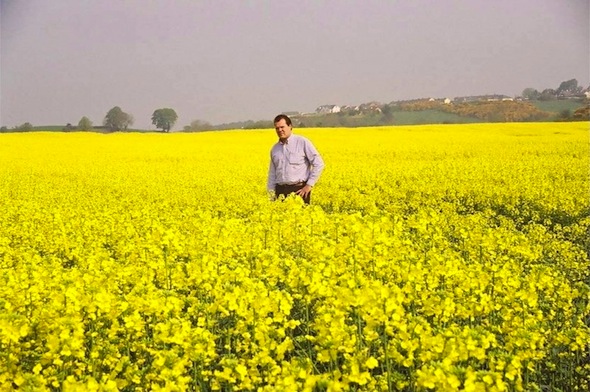 written by admin May 7, 2012
FacebookTweetLinkedInPrint

Fast becoming a feature in kitchens around the country, Donegal Rapeseed Oil is enjoying burgeoning success.

“Would you believe the idea to set up the business actually came from the Farmers Journal?” Austin Duignan, managing director of Donegal Rapeseed Oil explains.  “A couple of years ago Matt Dempsey wrote a piece of editorial on the need for a good food press for oil seed rape in Ireland. I looked into it and did my research, set up the company and as they say, the rest is history”.

Fast forward three years and with a Bridgestone Best in Ireland 2011 and Great Taste Award Gold Star under their belts Austin, his partner Stephen Allen and their team have their foundations firmly set in the Irish rapeseed oil market. “The crop has been grown in Donegal since the 1980’s where until recent times it was exported, or used as a component in animal feeds” Austin explains. “Most of our yield comes from east Donegal and the natural nearby hinterland”. Once harvested it is brought to the now state of the art food plant where it is processed, bottled and packaged. We wanted to keep the processing as close as possible to the origin of the crop.

Part of the ethos of the company is to keep the product local and deal directly with farmers to give them the best possible price for their crop. No stranger to farming, Austin was brought up on a mixed farm in Boyle, Co Roscommon and now farms pedigree Angus cattle alongside running the business. He attributes the success of the rapeseed oil to its unique taste and flavour.  Donegal has a long tradition of producing quality seed potatoes with a high health status due to its unique climate.   “Our 400 miles of coastline provides high levels of clean sea air meaning disease has little chance to spread, so the crop has a fantastic environment in which to grow”. The seed is allowed to mature slowly in the pod.  This is as a result of the longer day light hours due to the fact that we are more Northerly. Austin compares this to wine, “You might have the same variety of grape but because they are growing in two different regions the taste is noticeably different”. So, in effect the micro-climate here this far North gives it its distinctive taste.

Not only is the taste important, the health benefits speak for themselves as Donegal rapeseed oil has a much  lower saturated fat content than any olive oil in the market.  It only has 6% saturated fat content compared to most olive oils at 14% and sunflower oil at 10%.     It contains Omega 3, 6 and 9 as well as Vitamin E, in keeping with the 2:1 ratio recommended by nutritionists.  According to Thomas Hughes Sales & Marketing Manager, oil seed rape is indigenous to northern Europe, Ireland included, and so our metabolism works best with rapeseed oil, just like the Italians consume vast amounts of olive oil which best suits their genetics.

The particular flavour of this rapeseed oil is attractive to many Irish chefs, one well known ambassador of the product is Neven Maguire. “Neven was using our oil before we ever knew it! We struck up conversation with him at one of his cookery demonstrations, ready to pitch the product, and we couldn’t believe our ears when he revealed he used the oil all the time”. Now Thomas regularly travels to Nevens demonstrations throughout the country to promote and sell the rapeseed oil and secure new stockists.

“It’s really the taste that’s winning it. We’ve had people from as far as Texas and Chicago contacting us looking for our rapeseed oil”. Do they foresee the product stocked on shelves in stores across the Atlantic? “We certainly aren’t ruling out exports, we’re concentrating on consolidating our current extensive success in the Irish Market ”.   All in good time.