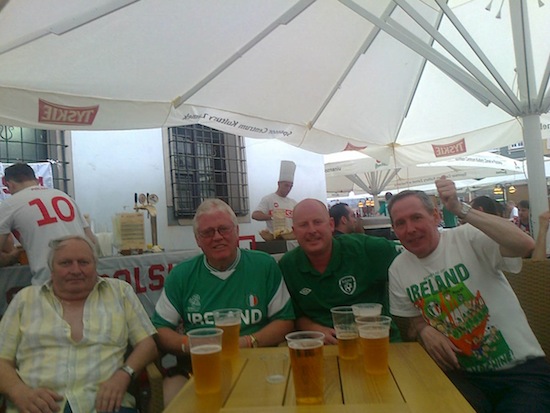 With just hours to go before Ireland officially kicks off its participation in Euro 2012, Donegal has gone football mad!

Flags are draped from cars, buildings and even dogs around the county’s villages and towns as we prepare for tonight’s crucial openings game against Croatia (kick-off 7.45pm).

And it’s very much “beer we go’ in Poland as well as hundreds of lucky Donegal fans prepare for the game.

Eric said the lads are having a ball and were really looking forward to the games.

“There’s a great atmosphere here but I hear things are really beginning to build up back home in Donegal.

“We’re confident we can do it tonight and get off to the perfect start.

“Somebody will have to send us over some money if we get out of the group stages,” laughed well-known BBC reporter Eric.

Donegal Daily will bring you more as the countdown to tonight’s game continues.

If you have any pictures send them to info@donegaldaily.com.