Tickets for the All-Ireland Football Final between Donegal and Mayo are already fetching more than SIX times their face value. 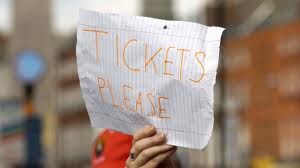 As fans begin the hunt for the golden passes, it has already become clear that many may have to pay well above the odds to see their heroes at Croker Park.

A number of on-line agencies are demanding hugely inflated prices for the game.

One online ticket agency www.needaticket.ie is offering the cheapest tickets in the Upper Davin Stand for a wallet-thumping €300 while seats in the Hogan or Cusack Lower Tiers are being advertised for €500 each.

It is estimated that Donegal clubs will get a total of up to 14,000 tickets despite the fact that more than 35,000 Donegal fans attended the semi-final against Cork.

Fans are being advised to try all possible avenues and contacts to get their hands on tickets.

Fans are also testing the water in a bid to get their hands on tickets.

One fan, Lisa Boyle, has put an advert on the DoneDeal website offering €150 per ticket and is looking for up to 8 tickets.

She also said she is willing to pay more cash for better seats and will take pairs of seats.

County Secretary Hugh Martin Ferry has told fans to try all in their powers to get a ticket warning that many clubs will simply not have enough to meet demand.

Most clubs are offering adult members tickets first and then trying to accommodate the juvenile members.