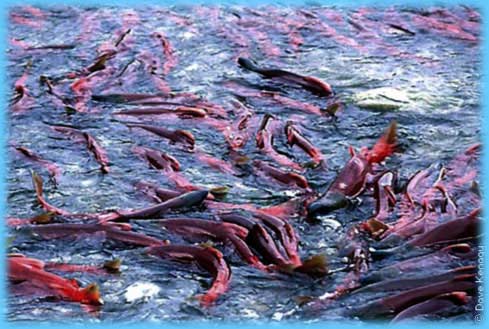 A DONEGAL fish farm has been halted amid concerns all fish farms in the county could be facing new restrictions.

The authority which regulates fish farms in the country has also issued a strongly-worded statement questioning the number of jobs created by them.

It has questioned one new fish farm in Galway Bay and is opposing two others – in Donegal and Mayo. It says scientific studies show sea lice from farmed salmon are wiping out wild salmon stocks off the Irish coast.

The Inland Fisheries Ireland (IFI) is the state agency charged with the conservation, protection, development, management and promotion of Ireland’s inland fisheries and sea angling resource.

The Board of IFI agrees with the recent statement by Minister Fergus O’ Dowd on offshore salmon farming and welcomes the development of Ireland’s aquaculture sector, once any development complies with Ireland’s obligations under relevant EU environmental legislation, particularly the Habitats Directive, and does not adversely affect salmon and sea trout stocks.

The Board have made a submission on the Environmental Impact Statement (EIS) prepared by Bord Iascaigh Mhara (BIM) for the proposed offshore salmon farm as part of the public consultation process, and recommends that this submission, which is on the IFI website, is read in full by any interested parties.

In the submission, concerns were raised in relation to the location and scale of the proposed salmon farm and how its development and operation could impact on wild salmon and sea trout stocks and their habitat. These concerns are based on scientific reports by respected authors and knowledge of the impact of existing fish farms on salmon and sea trout populations off the west coast of Ireland.

The Board says it welcomes any sustainable initiative which will provide jobs in rural coastal communities however it queries the figure of 500 jobs being associated with the proposed offshore salmon farm.

Published data on employment and production in the salmon farming sector show that 9,923 tonnes of salmon were produced in 2007 and 133 Full Time Equivalent (FTE) people were employed in salmon farming.

If the same ratios, 74.6 tonnes of salmon per person employed, are used in the context of the current proposal for a 15,000 tonne salmon farm this accounts for only 202 jobs.

A very recent report in aquaculture news site www.fishnews.eu claims that Scottish Islanders were delighted that a new 2000 tonne salmon farm had been granted planning and would create 4 full time jobs.

“Again if applying the same ratios to the current proposal this amounts to 30 jobs, assuming no economies of scale,” said the IFI.

The statement went on: “Notwithstanding this the Board have serious concerns that whatever the number of jobs created by the current proposal they will be more than offset by the associated loss of jobs in the recreational angling and tourism sectors if this development proceeds without adequate environmental protections in place.

“Top line figures from a recently commissioned survey of domestic recreational anglers suggest they contribute approximately €143 million to the economy, predominantly in rural areas, with the preferred locations for angling overnights in the West and South West and an additional €89 million is contributed by tourist anglers.

“The Board believe that Ireland’s reputation as a pristine wild fishery destination must be safeguarded. Angling tourism is characterised by the fact that consumption takes place where the resource is readily available, such as on the West Coast.

“Tourism activity is particularly concentrated in areas which lack an intensive industry base, and it is credited with having a significant regional distributive effect. Consequently, the economic benefit is kept within Ireland, and not expatriated to another country which would most likely be the case if an international operator was awarded the franchise to run the proposed offshore salmon farm.

“The Board believe that proposals being brought forward for two further offshore salmon farms in Mayo and Donegal are premature given that significant issues over the current proposal have not yet been resolved. No further applications should be progressed until all stakeholders are satisfied that the current proposal is sustainable and has no adverse impact on wild salmon and sea trout stocks.

“Despite the ever increasing pressures on our fisheries, Ireland still boasts a wealth of inland and sea angling resources which greatly enhance the quality of people’s lives on a daily basis as well as delivering economic and social benefits to the Irish economy in the form of job creation, social inclusion and tourism revenue. We cannot be complacent about the resource, or our management of the environment. In this regard the Board of IFI would like to reiterate its commitment to the protection of Irelands wild fish and the aquatic habitat.”