Can’t Pay Won’t Pay have called on people in Gaoth Dobhair and the surrounding area to show their anger at continuing austerity on budget day by protesting outside the office of Minister for State, Dinny McGinley TD. 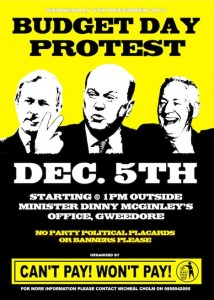 “Minister McGinley needs to explain to the people of the area how he can justify continued support for the policy of austerity which is bleeding our community dry.” said spokesperson Micheál Cholm Mac Giolla Easbuig.

“We are facing another savage budget which will further reduce living standards, take money from the local economy and cost jobs. It is not acceptable for public representatives to put their careers and pensions before their responsibility to defend the interests of our community.”

The Can’t Pay Won’t Pay spokesman said she budget will also see the announcement of the Property Tax, which will be even more punitive than the hated Household Charge and looks to burden the average family with another bill for several hundred euro.

“I predict the boycott of the Property Tax will be even greater. Last year we had to convince people that a huge boycott could work. This year everyone can see that it is a reality and it will encourage even more people that if we stand together we can make these bondholder taxes unworkable.”

“We need to send a strong message to the government from the very start – we will not pay for the reckless gambling which drowned the economy in debt to bail out the banks and bondholders. If Minister McGinley and the government are looking for alternative sources of revenue, how about a wealth tax? Or higher income tax on high earners? Or ending the non-domecile tax scam? We still have a very wealthy society. The problem is that huge wealth is concentrated in too few hands.”

“Show your anger at what is happening. Let them know that we will not sit back and let them pile tax after tax, charge after charge on us. Come along to the protest on budget day, even if it’s just for your lunch break.”

The protest takes place on December 5th at 1pm outside the office of Dinny McGinley TD in Bunbeg.