Another Donegal lad is set to make his name in the professional football ranks after signing a professional contract. 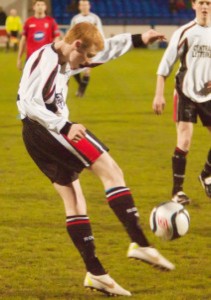 Dale Gorman, the 16 year old son of well-known player and coach Anthony Gorman, has signed for English League One side Stevenage.

Dale, who is in fifth year at St Eunans College, will join the team next July.

Dale, who plays with Letterkenny Rovers, also plays with the Northern Ireland Under 17 team.

Dad Anthony and mum Sheila will head over to Stevenage after Christmas to check out the facilities at the club.

The couple have relations close to Stevenage which will help the young Letterkenny lad settle into his news surroundings.