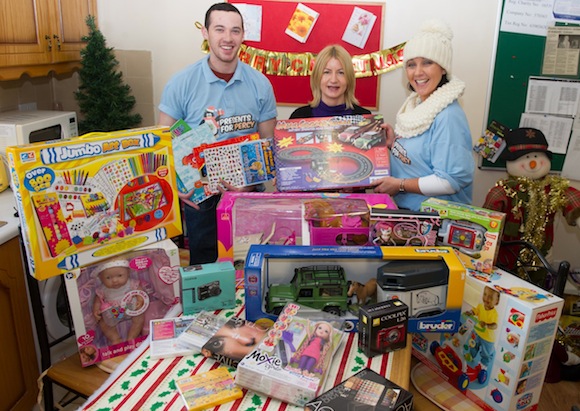 The staff team at Donegal County Childcare are delighted to reveal the final tally on the Presents for Percy Appeal is a massive €14,000.

All donations have been distributed within County Donegal to help a staggering 130 local families in need of a little help with meeting Santa requests for their children this Christmas.

Avril McMonagle, Manager of DCCC said today: “The Presents for Percy Appeal was under pressure from the word go as the request lists from families more than doubled for Christmas 2012.

“But the team upped their efforts and thanks to a range of individuals, agencies, local businesses and early childhood services the final tally also more than doubled the 2011 total.”

Over the past week the DCCC team have purchased a range of toys and vouchers to match the Wishlists of 130 families and approximately 400 children.

Due to unprecedented demand from parents, the appeal also purchased a range of vouchers for food and clothes that can be used in local stores.

To ensure that all donations are targeted to those most in need of support, all purchases were distributed through local agencies all over the county including Parentstop, Cara House, Donegal Women’s Domestic Violence Service; Letterkenny Womens Centre, Action Inis Eoghain, St Vincent de Paul Falcarragh, Castlefinn, Stranorlar, Mountcharles, Clonmany, Killygordon, St Johnston Family Resource Centre and a number of individual parents and families who approached DCCC privately.

DCCC would like to thank all those who supported the appeal – regardless of how large or small your donation it made a real difference, your efforts will ensure at least 400 smiles this Christmas morning! A public acknowledgement of all those who helped us out will feature in local press in the New Year.