MCHUGH GETS STEP CLOSER TO WEMBLEY AT GIVEN’S EXPENSE 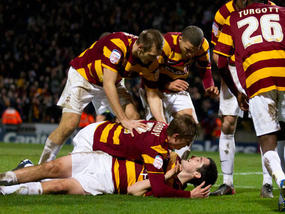 Donegal native Carl McHugh helped Bradford take a step closer to Wembley glory in the League Cup when his team overcame Aston Villa 3-1 in the first leg of their semi-final clash.

McHugh even chipped in with the third goal in Roy of the Rovers stuff for Bradford.

Another Donegal man who wasn’t smiling was Lifford man Shay Given who was in goals for Villa.

The money must be on Bradford who take the 3-1 advantage into the second leg.

Bradford Manager Phil Parkinson said: “We’re absolutely delighted with the way we played, obviously, because from the first minute to the last the lads were tremendous.

“But equally we know we’re only halfway there, we’ve got a very difficult job in a fortnight’s time.”

“Against Arsenal it was a great night for us but I think the all-round performance tonight was better,” he said. “Villa played a very attacking team and we had to defend well, and equally they left a lot of space on the pitch for us to play.

“Our quality players had to stay composed on the ball and they certainly did that.”