LETTERKENNY MEN TO SNOW WHAT THEY’RE MADE OF IN ALASKA! 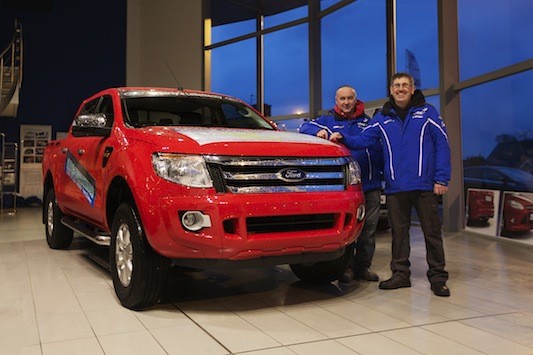 We’ve all heard the song ‘North the Alaska’ but a team from Letterkenny will make this a reality when they take on a daredevil challenge in March.

Les O’Donnell and Denis Ferry, who run their own garages at Mountain Top in Letterkenny, hope to complete a fundraising expedition that starts at the top of Ireland – Malin head – and ends at the top of America – at a town called Deadhorse at Prudhoe bay in Alaska. Deadhorse is 350 miles north of the Arctic Circle.

Paul Doherty from Kilmacrennan, who was recently placed in the top ten photographers in the world, has joined the team to record and photograph the trip.

Asked why they have taken on such a mammoth and risky challenge Les quips, “we didn’t know whether we would be fit enough to run a 5k sponsored run so instead we decided to fly 16,000 miles to the Arctic Circle and drive 1,000 miles on one of the worlds most dangerous roads.” 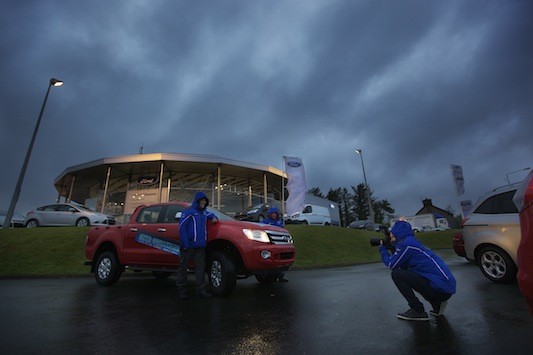 The team will leave Malin Head on Thursday 28th March 2013 in a Ford Ranger and travel to Dublin – the easiest part of the trip.

They will fly 8,000 miles to Fairbanks in Alaska where a specially adapted arctic Ford Escape equipped with studded snow tyres, CB radio, satellite phone, camping and survival equipment awaits them.

On Holy Saturday they start the trip up the Dalton Highway. The road has been made famous by the TV programme Ice Road Truckers screened on the Discovery Channel and currently aired on channel 5 on Friday nights. The team will travel the same route as the ice road truckers from Fairbanks to Deadhorse at Prudhoe bay

The first leg of the journey is 240 miles to a town called Coldfoot, here they will refuel and stay the night. On Easter Sunday an early start is needed, as the further north you go the lower the temperature, and they must make the next stop before night which is Deadhorse, some 260 miles away.

Explaining the depth of isolation Denis says that between these two stops there is nothing, only a road and snow, no petrol stations no towns, nothing.

“Once at Deadhorse we will be at the Arctic Ocean and the top of America. That’s the last stop before the North Pole. We will spend the next day here and then head South, down the Dalton Highway, stopping 260 miles south in Coldfoot, resting for the night and preparing for the journey back to Fairbanks the next day. This will involve crossing the Artic circle after 100 miles.”

The timetable they have will be determined by the weather, which is expected to be around -25c. People have been stuck for periods of time due to road blocks caused by snow storms and avalanche’s hence the need for the survival equipment and the specially Arctic-prepared FORD ESCAPE.

Les and Denis are undertaking the challenge in aid of three local charities – Donegal Hospice, Friends of Letterkenny General Hospital (the COPD unit) and Cairde la Cheilie (friends together supporting people with disability).

All monies raised will be given to the charities. Denis, Les and Paul are paying for there own flights and accommodation while Hegarty’s Ford Letterkenny are sponsoring both jeeps and all fuel used is sponsored by Top Oil in Bonagee. Other sponsors include PPG Auto paints Letterkenny, Carpet Interiors, Irwin electrical, LK bikes, Pinehill Warehousing and Media Box.

Denis and Les have chosen the charities for their own personal reasons. Fundraising will take place from a mix of selling tickets, one for each mile completed.

When you buy a ticket you will be entered into a draw with the winners drawn after an evening of sharing stories, photos and perhaps even video footage of the men’s trek.

Please support the Donegal Ice Road Trekkers on their Arctic Challenge. For more information contact Denis or Les on 087 2536275 086 8098818 or email: donegaliceroadtrekkers@hotmail.com

LETTERKENNY MEN TO SNOW WHAT THEY’RE MADE OF IN ALASKA! was last modified: January 29th, 2013 by Stephen Maguire
FacebookTweetLinkedInPrint
Tags:
ArticDenis FerryLes O'Donnell