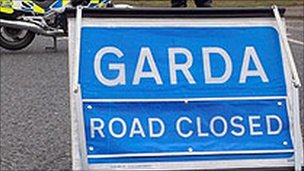 GARDAI are at the scene of a three-car smash in Co Donegal today.

The incident happened at the roundabout where the N13 and N14 meet near Manorcunningham.

Two of the vehicles have been badly damaged. There are no serious injuries.

Traffic travelling to and from Derry and to and from Lifford is slow as a result of a follow-up Garda investigation into the crash which happened at 4.20pm.