A major pollution incident – and possibly worse – was narrowly averted in Killybegs harbour when a stricken vessel lost power in stormy conditions. 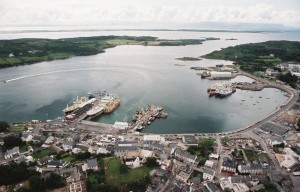 The Spanish freezer vessel, “Aldan”, with 400 tonnes of fuel on board and a crew of 18, started drifting when the main engine failed about 10 minutes after casting off from the Auction Hall pier.

Disaster was averted by the quick thinking and skill of staff of Sinbad Marine Services Ltd. who managed to bring the vessel under control using only the company pilot boat.

Killybegs has been without full-time tug boats for the past several weeks following the announcement by Sinbad Marine that it could no longer afford to provide the service which was costing the company more than €1,000 a day.

A call by the Killybegs Fishermen’s Organisation for the Department of the Marine and Donegal County Council to step in is said to be “under discussion” at present.

The assumption that a high-powered tug with fire fighting capability will be on hand in an incident is written into the emergency plans of both the Coast Guard and the Fire Brigade.

The engine failure on the “Aldan” has sen it remain tied up in Killybegs while a deep sea tug makes its way from Gijon in Northern Spain to tow her away for repairs.

The “Aldan” came into Killybegs under her own power last week and her engineers spent three days attempting to deal with a fault that had developed.

The vessel attempted to leave on Friday night but had not cleared the port when the main engine seized.

The crew of the pilot boat, “Sinbad”, responded quickly and succeeded in bringing the vessel back to her berthage. It is now expected that she will be towed out of Killybegs on Easter Monday.

Said Jim Parkinson, managing director of Sinbad Marine Services Ltd.: “This is precisely the type of situation we have been warning about. If the pilot boat and her experienced crew had not been on hand, there could have been a disaster. In a situation like this, the response needs to be in two minutes, not in two days.”

Martin Howley, chairman of the Killybegs Fishermen’s Organisation, said that the skill and quick response of the Sinbad crew had undoubtedly saved the day. “This was a case in point and shows that Killybegs cannot work without a tug service”, Mr Howley said.