BIG-HEARTED HENRY PAYS BACK THE COMMUNITY WHICH SAVED HIS LIFE

When Henry McLoughlin collapsed at a funeral in Burt earlier this year, he genuinely thought his time had come. 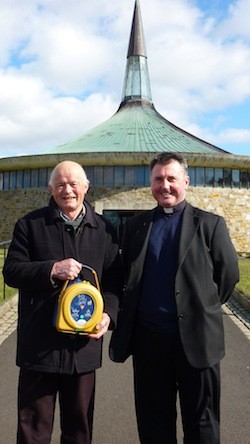 Henry was attending a funeral at St Aengus’ Church in January when he began to feel unwell before suffering serious cardiac arrest.

Now kind-hearted Henry has donated a defibrillator to St Aengus’ as an extraordinary gesture if someone should suffer the same misfortune as him.

Henry made the donation of the vital piece of medical equipment to Fr Sweeney at St Aengus’ in Burt this week.

Medical experts say to have such a defibrillator on hand can help save a life with research showing that for every one minute that passes after cardiac arrest, a person has 10% less chance of survival.