written by admin May 18, 2013
FacebookTweetLinkedInPrint 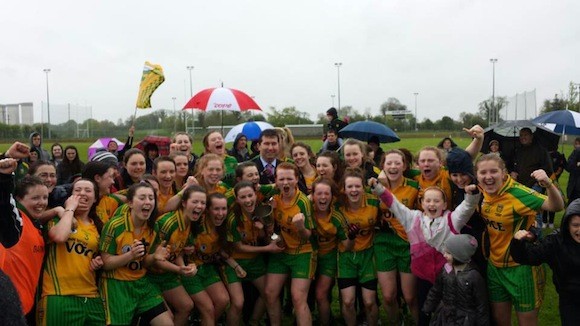 DONEGAL LADIES Minors are Ulster Champions after a stunning comeback victory over Cavan in Ballyconnell this afternoon – and it was super-sub Amber Barrett who almost single-handedly brought the crown back to Donegal.

The brilliant Milford star hit an incredible FOUR goals after coming on in the second half to overturn a half-time Cavan lead.

Moville’s Blaithnaid and Kathy McLaughlin hit a goal apiece in an incredible game and keeper Kathy Ward saved a penalty in day of heroics for Donegal ladies football.

It was a remarkable victory.

The first half was one of the longest ever played in a Ladies match, stretching to 43 minutes due to stoppages.

Shannon McGroddy got the first score of the game, bursting through from midfield.

But Cavan came back and scored a goal through a penalty before adding a point to turn the tables.

Roisin Curran added another point for Donegal, however it could have been a lot worse for the visitors as Glenfin’s Karen Ward saved a penalty to keep the sides at Donegal 0-04, Cavan 1-05 at the break.

Donegal’s poor wide count continued at the start of the second half, as Cavan extended their lead to four points.

Donegal ladies were in a real fight and Amber Barrett came on for Sadhbha Medlar while Kathy McLaughlin replaced Erica Hanna as the conditions took their toll on tired legs.

And what an inspired substitution that proved to be by manager Ann Marie Gibbons!

Milford star player Amber showed all her skills and cunning to score two goals in the space of three minutes to turn the game back towards Donegal, wiping out a six point deficit and to tie the match at 2-04 to Donegal and 1-07 to Cavan.

The other sub, Moville’s Kathy McLaughlin, was having none of that.

And just two minutes later she fired a cracking goal into the bottom right hand corner to move Donegal into a three point lead 3-04 to 1-07!

If anyone thought that Amber was finished, they were wrong – hitting two more stunning goals in the space of the next ten minutes.

If PaddyPower had been taking bets on that score at half-time, you’d have been given odds of 1,000-1!

Blathnaid McLaughlin added a sixth goal after the ball slipped through the Cavan keeper’s legs to complete a stunning victory!

And that was definitely game over. Cavan pulled a goal back but it was merely a consolation.

Roisin Curran and Emer Lafferty accepted the cup from Michael Naughton on behalf of the Ulster Council. 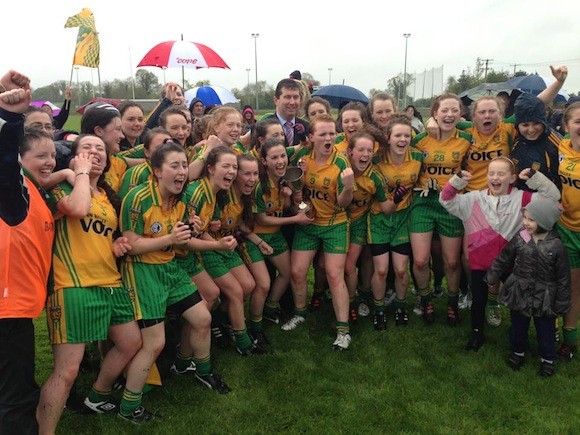