This weekend sees the 20th anniversary reunion of the First Irish Ascent of Everest (and the first British ascent via the North Ridge), taking place at Gartan Outdoor Education Centre. 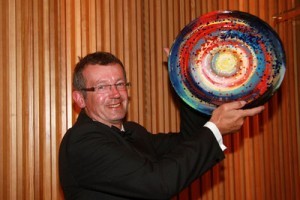 Twenty years ago, on Thursday 27th May 1993, Dawson Stelfox, expedition leader, climbing with the unflagging support of the full expedition team and base camp staff, and family and friends at home, arrived at the summit during a brief window of good weather.

All expedition members, except Richard O’Neill-Dean, now living in New Zealand, will be at Gartan, along with base camp managers, expedition doctors, support trekkers, families and friends.

Robbie Fenlon, climbing team member who was a mountaineering instructor at Gartan at the time of the expedition, will be returning for the event.

Also attending is Lorna Siggins, Irish Times reporter who, without the benefit of internet and mobile communication, reported regularly to an anxious audience at home.

Lorna’s book on the expedition, Everest Calling – Ascent of the Dark Side: The Mallory-Irvine Ridge, has recently been updated by both Lorna and expedition climber Dermot Somers. Everest Calling – The Irish Journey recalls this ground breaking success, and chronicles the many Irish achievements since.

The expedition members, and Gartan Director and President of Mountaineering Ireland, Ursula MacPherson, also extend their congratulations to Letterkenny man Jason Black on his achievement in successfully reaching the summit of Everest, via the North Ridge, earlier this week.

Ursula also took the opportunity to pay tribute to Namgyal Sherpa, who she climbed with on Shishapangma, an 8,000 metre peak in Tibet. Namgyal died last week on the summit ridge of Everest, while descending from his 10th summit.

A champion of protecting the Himalayan environment, a first class climber and guide for many seeking to achieve their dreams on Everest, Namgyal was a highly respected member of the Sherpa and climbing community.

His death again emphasizes the commitment and risks that Sherpas make in supporting climbers of all nationalities, without which most modern day ascents would not be possible. Rest in Peace Namgyal.