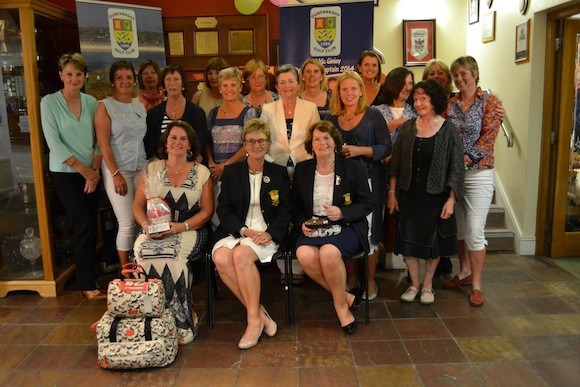 No this is not a joke and he did not wear a skirt, the Lady Captain always puts up a prize for the gents as well and Stephen had the best individual score of the weekend.

Lady Captain’s day was on Saturday past and it was a very successful day for all including Robyn McConnell who managed to win both Lady Presidents day and Lady Captains day. I think this is a first for the lady’s branch. The band playing on the night (One for the Road) was the best band I have ever heard in Dunfanaghy bar none and all the people remaining after the presentation would agree. It’s the first time I have seen everyone in the club dancing – nobody seated at all – they were brilliant and a lot of members missed a truly fabulous night. But there was just enough room for dancing – ask Paul Smith. We will try and get them again in the future.

In the afternoon William Hamilton, his Son and Bill McCallion entertained the crowds in the Clubhouse with a terrific range of music including Irish, traditional, pop and Les Mis etc. We are blessed with so much talent in our club we need other occasions to get it out.

Now to the notes. On Monday 5th August we had a 4BBB Open and the scores were very close with one point separating the winners. It was the unusual combination of Thomas (hit it long)Alcorn and Steady Mal Johnston who did the business coming home with 45 points putting Kevin James and Mick McGinley into second place on 44 points. The tried and trusted team of James Brogan and Roger Green took third with 43 points.

Wednesday 7th saw a massive return to form for Fr Sylvester O’Flynn when he cruised round the course turn with 3 birdies to put him ahead of his 4 ball opponent Neil McGinley who himself has seen a welcome return to form again. Just in time for Captain’s day this weekend. A couple to watch here maybe. Fr O’Flynn scored 44 points on the day with Neil 2 points back on 42. Donal Boyle (back from holidays) took the gross and Billy Griffin was third on 40 points.

Saturday was Lady Captains prize to the gents and it was hotly contested with again the first 3 places separated by one point each. But it was the steady play of Stephen Leyland who took the honours with a super score of 42 points just managing to pip Bill McCallion for the top slot. Bill had also a super score of 41 points and that was enough to push Paul McGinley into 3rd place on 40 points. Michael Wilson Currently the Amateur record holder in Dunfanaghy, took the gross with 39 points. But more on this later.

Sunday was a singles Stableford competition and the weather was dry but quite windy. This pegged the scores back somewhat and here 37 points was enough to ensure Joe Toner took the winning prize. Second and third place were decided on BOT with Brian Dolan getting the better of Ray Finn with 36 points. The gross went to Sean Duffy Jnr with 29 points.

This week sees Captain’s prize to the ladies on Tuesday, Captain’s Shootout on Wednesday and Mixed foursomes on Thursday.

There will be a Captain’s Scramble on Friday at 4pm.

Captain’s day is on Saturday and the booking sheet is active and filling fast.

Next week is the Caravanners Classic competition with the usual quiz on Friday night so come and enjoy the craic.

The Senior and Intermediate Scratch Cup is being held on Sunday 1st September and you can book on line at Dunfanaghy golf Club or Telephone 0749136335 for a slot.

There is a guaranteed prize of €500 for the first player to beat the current Amateur Club Record of 6 under (62) which is presently held by Michael Wilson.

What a busy week it was for the Juveniles this past week. It all started with the inaugural challenge match between Letterkenny, Gweedore and ourselves at our home course. Some great golf was played and the eventual winners after a very tight contest were Letterkenny. As I am writing this the boys will be polishing the clubs for the return match in Letterkenny later today.

In the girls section Marcella Dolan with Ciara Mc Garvey and Theresa Mullen filled the lower places. In third place was Mary Ann Mullen who just finished behind Katie Mc Laughlin and the winner of the Lady Captains prize to the Girls was Sarah Sweeney. Well done Sarah.

Pride of place on the day must go to Finlay Marriot who played unbelievable golf to take the visitors prize. His younger brother James also played astonishing golf for such a young person to lift the Cadet Visitor section. Finlay’s performance stole the show.

On Saturday morning the usual competition was played with Hugh Burke again edging the Cadet section this time from Eoin Bonner.

In the main Juvenile section Kyle Mc Garvey got the better of Conor Cheevers on BOT to secure victory. James Sweeney finished third.

This week’s competition will take place on Friday morning at 10.30 and will be a twelve hole competition. There will be no competition on Saturday next as it is Captain’s day at the Club.