HOSPITAL MANAGER DISMISSES ‘RUMOURS’ OVER FUTURE OF HOSPITAL AND ITS STAFF 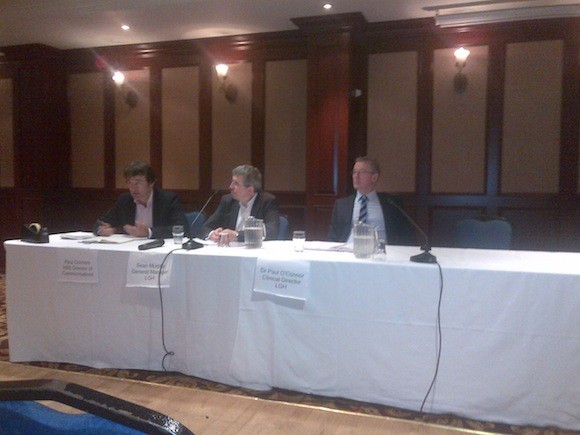 They’ve also slammed claims that maintenance and work at the site hadn’t been carried out and this contributed to the flood which caused millions of euro worth of damage three weeks ago.

They spoke out as the hospital’s interim Emergency Department begins operations today, taking some ambulance patients until Sunday night, with walk-in patients from north Donegal from Monday.

Sean Murphy, the hospital manager, dismissed what he called “all sorts of rumours” about the future of catering services.

Meals had been brought in from Mayo over the past fortnight but the cooking of all meals will resume in Letterkenny in two weeks’ time when new temporary facilities are opened.

“There have been rumours and they’re not true,” said Mr Murphy.

“We are working to do as many things as possible in as short a time as possible and catering will be back on site in the next two weeks.

“Catering facilities are being organised and will be on site so that all meals for staff and patients will be prepared at the hospital in a couple of weeks time.”

It’s understood management were keen to dismiss rumours that catering at the hospital was going to be outsourced to another company.

Mr Murphy insisted staff would all be back on site and preparing meals.

And Paul Connors, the head of the HSE’s Communications Department, said he wanted to “nail” the suggestion that the hospital had failed to comply with works in 2002.

He said council officials and HSE officials had discussed the claims and concluded they were “rubbish.”

Mr Connors said the HSE were “totally committed” to restoring all services to Letterkenny General Hospital in as short a time as possible.

He and Mr Murphy confirmed that the Government waived red tape to allow work on the site to proceed quickly.

Several local contractors won sub-contract work on the site including joiners and electricians.

Dr Paul O’Connor, the hospital’s Clinical Director, said staff were pleased at how quickly progress had been made to begin the restoration of services.