PETER BAFFLES THE DOCS TO NOTCH UP HIS 100TH MARATHON

A Donegal man who was told by surgeons to stop running a number of years ago notched up his 100th marathon today! 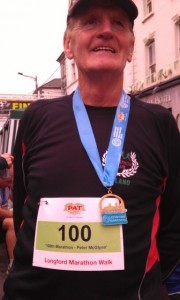 When Peter McGlynn underwent a quadruple heart by-pass after completing his 67th marathon, most thought his race days were behind him.

A round of golf or a spot of fishing were probably what the doctor ordered.

But those who knew the Letterkenny man allowed themselves a gentle smile at the thought of Peter throwing his runners into a cupboard to gather dust.

But the Bomany man is no ordinary athlete.

So when he completed his 100th such race this afternoon in Longford, some weren’t that surprised at all.

As the former HSE employee puts it ‘They told me to perhaps not run another marathon but they said nothing about walking them.”

Peter can be seen tramping the streets in and around Letterkenny and into the wider countryside most days. 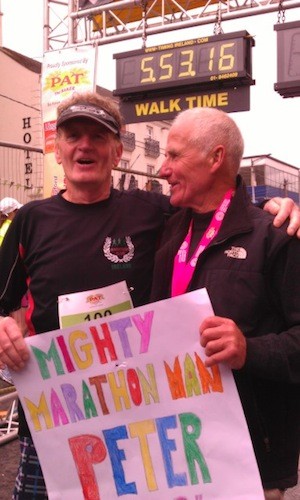 Peter celebrates with his friend Seamus Temple at the finish line today.

If he’s not with his trusted friends Seamus Temple and Jimmy Harte, he’s alone but always raising a hand to the endless motorists who salute him.

Today he nipped in under the six hour mark and told Donegal Daily he was delighted having reached a century of marathons.

The ever-competitive athlete said “We were over three hours at the half-way stage so we had plenty of ground to make up.

“I’m delighted we did and I’m delighted to have completed one hundred marathons. I feel great but I am tired.

“I need a bit of a rest before I can even think of celebrating,” he said.

Peter was met at the finish line by his friend and fellow marathon man Seamus Temple of Crievesmith, Letterkenny.

At 70 years young Seamus completed the half marathon version of the race in preparation for the Dublin City Marathon in October.

His friend Senator Jimmy Harte was also one of the first to congratulate Peter.

He’s an inspiration to young and old that life is for living and not sitting around growing old.