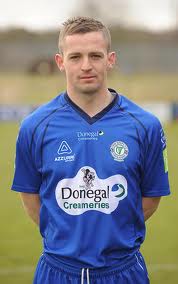 The Louth side are favourites to progress here – and you could have got 8/1 on Harps before kick-off.

But a goal in the 22nd minute by striker McHugh after great work by Thomas McMonagle has Harps ahead.

The cheers at half-time told you that the Donegal men and their fans are very happy at the break.