A public meeting is to be held in the Clanree Hotel in Letterkenny at 8pm on Monday, 23rd September to discuss the expected increase in class sizes in the upcoming budget. 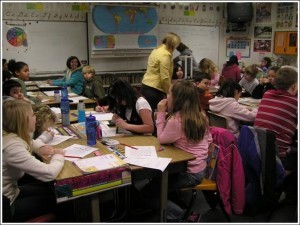 Many Donegal classrooms are overcrowded

The patron bodies and leadership groups involved in Irish primary education have come together to form the National Alliance for Primary Education (NAPE).

The Alliance has launched a pre-budget campaign asking Government to make primary education a priority, adding that any cuts to primary education are short-sighted, represent bad value for money and will adversely affect Irish society in the longer term.

In addition to lobbying politicians and launching a postcard campaign, the group is holding a series of public meetings around the country including the one in Letterkenny.

Representatives from school management, the Irish National Teachers Organisation (INTO) and parents will address the public at the meeting in the Clanree Hotel.

There will also be an opportunity for contributions from the floor. Politicians, parents, management, teachers and anyone with an interest in primary education are urged to attend.