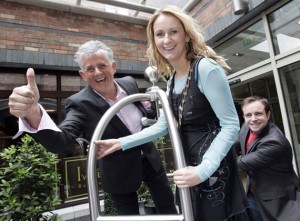 Cora during her time as Mayor

Sinn Fein County Councillor Cora Harvey has today announced that she will not be seeking nomination to run in the forthcoming Local Elections next year.

In a statement released by the party Cllr Harvey, a the county’s first female Mayor. has said: “It is with regret that I will not be seeking a nomination to run in the Local Elections next May and I will be stepping down as an elected representative on Donegal County Council in the coming weeks.

“This is a personal decision and one which I gave considerable thought too, it was not an easy decision but I feel it is the right one for me at this particular time. I have based my decision on the demands of family life, work commitments and my inability to give 100% over the next 5 years to the electorate, for these reasons I will not be seeking re-election for the next term.

“I have discussed this with Senior Party colleagues and Sinn Fein members over the last few weeks, and feel that now is the time to publicly announce my decision as we are fast approaching the local elections and the party are now in a position to host a local convention as potential candidates have come forward. Details of convention will be finalised in the coming days.

“I want to take this opportunity to thank the public who voted for me in 2009 and who gave me a sound mandate on Donegal County Council, I was privileged and proud to represent the people of the Stranorlar Electoral Area, many of whom are Neighbours, Family and Friends. I want the people to know that I will still be on the ground as a party representative and that Deputy Doherty’s office will be happy to assist any constituents.

“Furthermore I can assure the Public that the Sinn Fein party members will nominate a very capable replacement.

“I also want to thank Sinn Fein for giving me the opportunity to go before the people and represent the party in the Stranorlar Electoral Area and for supporting me over the past 5 years; I intend to remain active within the party and will play a key role in next year’s Local and European Elections.

“I would like to acknowledge the working relationship I had with the County Manager, Mr Seamus Neeley, Directors of Services and staff of Donegal County Council and to thank them for their co-operation over the past 5 years and to the Elected Memebers of the Council for selecting me as the County Mayor in 2010/2011.

“Finally I would like to Thank the Donegal Media for giving me a platform to articulate my politics and that of the Sinn Fein Party.

“For now I look forward to spending more time with my family, concentrating on my career and getting more involved in the local community which matters most to me.”