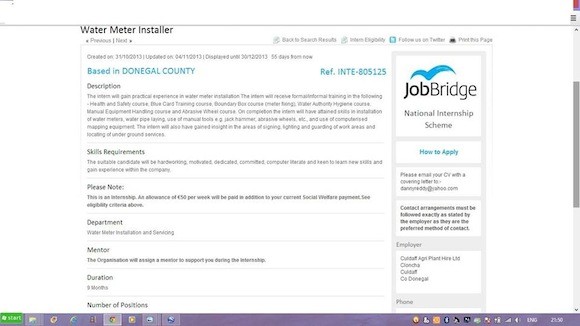 A company owner who has advertised two positions for water meter installers says he is only trying to create employment.

John Reddy of Culdaff Agri Plant Hire was reacting to claims that he is using cheap labour to make money.

Mr Reddy admits that he has advertised for two positions on the Jobbridge Scheme but says the applicants will be trained up to hopefully gain full-time positions.

“It is easy to sit around and criticise but it is more difficult to go out and try to create some jobs. That’s all I’m trying to do.

“I have a contract and I have four water meter installers and I need two more people to be trained up.

“This is the way things are going and I am trying to create a viable business here,” he said.

He was responding to criticism of the Jobbridge advert by Inishowen county councillor Jack Murray.

Councillor Murray said “While being absolutely opposed to the taxing of public water as a matter of principle, I am disgusted to see that the government is now hoping to have water meters installed through cheap labour.

“The rollout of water metering across the state will cost the public purse some €539million.

“Phil Hogan initially dressed this up saying that it would create 1600 jobs. Some people were even encouraged to pay €600 to be trained to install water meters. Now however, we see that not all of these people will earn a decent wage.

“A young person on social welfare gets €100 a week. The job bridge scheme would give them €50 extra. That is a scam and is nothing more than cheap labour.

“Rather than trying to create employment, the government is exploiting the unemployed by coercing them into cheap labour. That is a disgrace.”