RTE TV weather woman Evelyn Cusack has launched on air dismissal of claims that a postman can predict the weather by looking at nature or animals.

The astonishing dismissal of Michael Gallagher’s theories came just hours after the Glenfin man predicted a bitterly cold December – and a White Christmas.

Michael insisted on Friday that his observations of sheep in the fields and of plants and insects led him to believe snow is on the way.

Forecaster Cusack didn’t name Gallagher in her TV weather report – but her explanation came hours after Michael’s predictions went national on the internet.

She took the opportunity after the Nine O’Clock news to dismiss any suggestions that animals or nature could predict the weather (or earthquakes!)

“People have been asking if we will have a cold winter, and I’m afraid we can’t tell you that as forecasting only goes between five and ten days ahead,” she told viewers.

“But some people ask why we don’t use signs from nature? For example can animals predict not only the weather but earthquakes.

“Well I’m afraid not! There have been studies done,” she said.

And she finished her report by quoting scientist Carl Sagan (and displayed the quote on screen).

Sagan said: “It is far better to grasp the universe as it really is than to persist in delusion however satisfying and reassuring.” 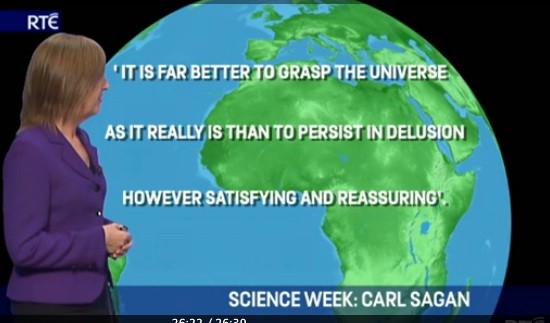