TREE-MENDOUS! CARNDONAGH BOUNCES BACK AFTER CHRISTMAS TREE BLOWN DOWN

The big-hearted people of Carndonagh have saved Christmas. 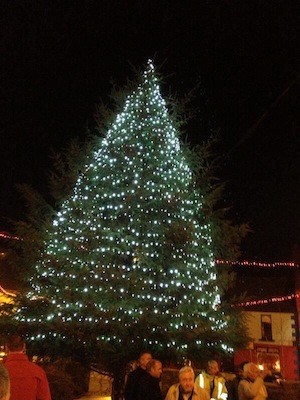 The new Christmas tree stands proudly in the Diamond in Carndonagh

A week ago the town was covered with a sense of sadness after a storm snapped its 50ft Christmas tree in half.

However, a campaign has managed to unite the town and put some festive cheer back into the local community.

The Carndonagh Christmas Tree Committee refused to be beaten and set up a plan of action to have a new tree erected.

And the response from people in Carndonagh and indeed around the globe was, dare we say it, TREE-mendous!

Organisers asked people to donate €10 to sponsor a bulb to buy a new tree and also new decorations.

A Night At The Races and other fundraising activities were organised to raise the cash for the tree.

And last night a new tree was erected in the Diamond and the lights turned on during what proved to be a wonderful occasion.

Good wishes flowed in from around the world as Carn displayed the true meaning of Christmas – community spirit.

Oliver Doherty of the Christmas Tree Committee told Donegal Daily the response has been nothing short of a Christmas miracle.

“Thankfully nobody was hurt when the last tree came down but people were very disappointed after all the hard work that had been put into putting it up.

“We decided to appeal to locals and to those who have left Carndonagh be they in Australia or America but still wanted to feel as if they were still in touch with home.

“And the response has been amazing. Not only have people from Carndonagh been amazing but we have received lots of good wishes from strangers around the world who were touched by the story,” he said.