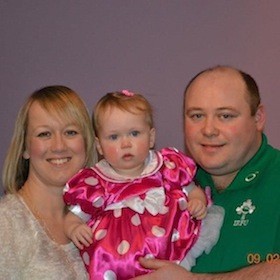 A Convoy woman had the perfect excuse not to serve Christmas dinner after she went into labour just minutes beforehand.

Susan Flinter was just about to serve up the traditional turkey and ham when she suddenly went into labour.

Susan, husband Aidan and daughter Tia (22 months) were about to sit down to dinner at their home in Convoy.

But they were forced to abandon all their cooking plans when the labour pains became too much for Susan.

Susan explained “I was due on December 18th and was taken in to Letterkenny General Hospital on Christmas eve but felt fine.

“When the doctor asked me if I wanted to go home, I jumped at the chance.

“The thought of Santa coming to my daughter Tia and me not being there was to much. We were waiting so much for him.”

Susan said she felt contractions but thought she was okay to go ahead with the dinner and play with little Tia for a while.

But minutes later, as Aidan assembled some of Tia’s toys, she knew she had to go to hospital.

“Aidan was very cool and cleaned up some of the dishes but I knew we didn’t have time for dinner – even if it was Christmas dinner,” said Susan.

Susan will leave hospital tomorrow with her perfect Christmas present and promises to have a late festive dinner with al the trimmings.

“I think we’ll have to try again and hopefully this time there’ll be no interruptions.

“I was looking forward to my dinner but now we have the perfect Christmas present and everyone is healthy and happy,” she said.