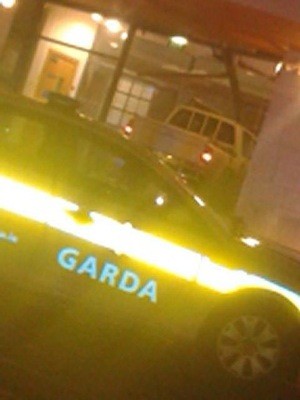 MAN ARRESTED AFTER JEEP RAMS INTO DOLE OFFICE AND PUB

CRASH LATEST: Gardai have arrested a man in relation to an incident last night in which a jeep was driven through the front door of the dole office in Buncrana.

The jeep which crashed into the dole office in Buncrana last night.

It has now also emerged that the jeep also crashed into a pub in Ture, Muff at 10.30pm.

The male suspect, who is 40 years old, was arrested just after 11pm at McCarter Road in Buncrana and is being questioned under the Criminal Justice Act.

It is not known if the man was being pursued at the time.

Nobody was hurt during either incident although considerable damage was caused.

A clean-up operation is underway today.

Local Buncrana Town Councillor Ciaran McLaughlin said people in the area are shocked at the events.

“Like everyone else I am shocked at the chain of events. There is obviously a Garda investigation so it would not be appropriate to comment.

“I think everyone is just relieved that nobody was hurt during the incidents,” he said.