A man in his 30s, who was being question in connection with a major drugs seizure in Ballybofey, has been charged this evening. 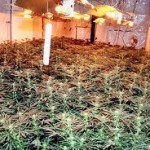 The man was being questioned at Letterkenny Garda station.

He will appear before Judge Paul Kelly at Letterkenny District Court tomorrow morning.

Three women appeared in court earlier today in connection to the drugs find, estimated at €360,000, above a Chinese restaurant, at Navenny Street on Tuesday evening.