PUBLIC MEETING TO BE HELD TO SAVE HISTORIC LETTERKENNY STREET

A public meeting is to be held to help regenerate one of Letterkenny’s best known areas. 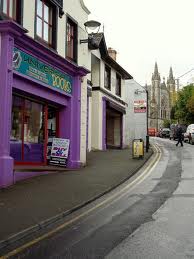 Save the Church Lane campaign is to to hold a public meeting in Gallagher’s Hotel in Letterkenny on Thursday, 30th January at 8pm.

The aim of the campaign is to regenerate the historical Church Lane street and to create a real hidden treasure for tourists in the heart of Letterkenny.

Unfortunately in the past few years many old buildings in the Church Lane have fallen into disrepair and pose a danger to the public.

This issue has been highlighted in the local media. All is not lost and there is great potential to create a real tourist gem and real jobs.

The idea is to create a craft village that will home to businesses which sell locally produced goods and services. This was first envisaged by Town Council member Jim Lynch over twenty years ago.

The people of Dunfanaghy, Donegal Town and Ballybofey have shared a similar vision and have created their own wonderful resources. Their visions and ideals were a seed that lay on barren ground for years, barely surviving. But one day people cleared away all the dead vegetation, gave the seed nutrients, water and sunlight and slowly watched as it grew into a big strong tree .

This is the concept we wish to evolve and with the support of all stakeholders, the ideals of Councillor Lynch will come to fruition and the Town of Letterkenny , People of Letterkenny and the centre of Letterkenny will have a space and an resource to be proud of on a local, national and international basis.

This vision which has successfully been recreated in Cities and Towns throughout the world (for example Galway’s famous “Latin Quarter”) has the ability to create both long term viable job creation opportunities and a centre to display the outstanding local crafts, culinery skills and creativity that exists both locally and throughout the County of Donegal.

It is envisaged that the “Cathedral Quarter” will attract huge amounts of tourists and local’s to visit , sample and experience the unique atmosphere that this intimate area can generate.

The Church Lane is steeped in the town’s history. On the top right hand of the Lane, we have Conwal Parish Church and graveyard which was originally built in 1636. In 1776, it has almost entirely demolished when the nave was extended and a chancel was added but the original tower was retained making the Church the oldest building in Letterkenny. Many notable people are buried within its boundaries including Rev. John Kinnear, former MP and Tenants Rights campaigner and Sir George and Lady Marbury, the founders of the market town in the seventeenth century.

At the top of the Lane is the symbol of Letterkenny – St Eunans Cathedral. When the Cathedral was built in the 1890’s, local farmers volunteered on Sundays to cart stone blocks arriving at the Thorn from Mountcharles. When the horses got to the Church Lane, 1/3 of the load was taken off and the horses slowly took the large blocks up the narrow muddy lane. This process was repeated until all the blocks made it to the top.

And in the middle of the Lane is the jewel in the Crown, the Gospel Hall belonging to the Plymouth Brethern. The founding Plymouth Brethern in Letterkenny erected the Gospel Hall in June 1895. John Storey, a former Town clerk, had been a Baptist pastor in the town and joined the congregation of the Brethern, meeting in the yard of John Davis, whose merchant business was on the Main Street. When they erected the hall in the yard, they cleared away a building to gain access to the Church Lane, hence the fact that the entrance to the hall today is further back than other building on the street.

The concept is that the whole of the community would be involved in the regeneration of the area and the project belongs not to one individual but to the people of Letterkenny.

Public participation is a huge part of the Facebook page as former residents of the Lane and people of Letterkenny have shared their stories creating a wonderful sense of nostalgia and pride. It is hoped that the people of Letterkenny will continue to participate in the campaign once the real work begins. We wish to co-operate with property owners so they can fully utilise those magnificent old buildings in such a serene setting.

The project is a massive undertaking that will require the ‘buy -in’ cooperation and assistance of all local stakeholders. The support and backing of Letterkenny Town Council, Donegal County Council, Local County Councillers, local People, House owners Business owners and local and international entrepreneurs as well as the press will be vital in the success of this vision.

There can be no doubt that the benefits of this vision first mooted by Jim Lynch are far reaching and will require a great deal of cooperation, planning, goodwill and understanding but the long term success of this venture is a legacy worth fighting for.

The organizers of the Save The Church Lane Campaign have taken the first steps by calling a Public meeting on Thursday the 30th of January at 8pm in Gallaghers Hotel ,Letterkenny where it is hoped a large crowd will attend. It is envisaged that all local representatives will also be in attendance. A new positive chapter in the history of Letterkenny and indeed Donegal is about to start.