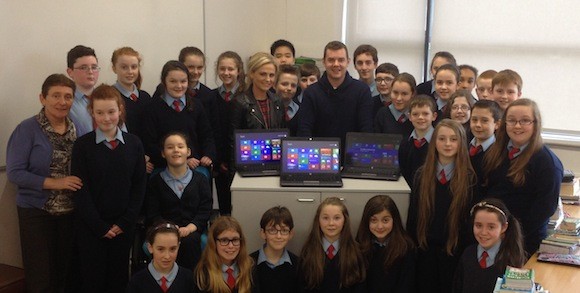 Danny and Amanda O’Carroll with principal Anne Foxe and pupils.

He’s normally dealing in dodgy goods or looking to make a quick pound.

But Buster Brown has shown he also has a very soft and giving side.

That’s because Buster, or the real-life actor behind him Danny O’Carroll, has come to the aid of a Donegal school after donating a trolley-full of laptop computers.

Danny and wife Amanda made the presentation to the pupils of Lurgybrack National School outside Letterkenny this week.

Their son Jamie is in first class at the 431 pupil school. 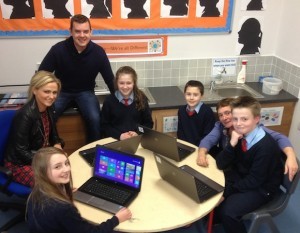 The school completed a large extension last April and the celebrity couple, stars of Mrs Brown’s Boys, decided they wanted to help.

Principal Anne Foxe said Danny and Amanda simply came into her office and asked what they could do to make the school better.

“There was no airs ad graces with them. They just came in and asked how they could help.

“We went away and thought about it. Like every school we never stop trying to fundraise because that’s what all schools have to do.

“We thought it would be nice to get some computers for the school and Danny and Amanda went away and got the computers.

“It was so good of them. It was a lovely gesture and they never asked for anything in return.

“They didn’t have to do it but they did and it has helped the school and the children so much,” said Principal Foxe.

Dublin Danny, the son of Brendan O’Carroll, met Donegal woman Amanda (nee Woods) from Manorcunningham when he was performing in Letterkenny several years ago.

Just minutes after meeting Amanda, Danny phoned his famous dad and said he had met his ‘Jenny.’

The couple have two sons and they often donate to local charities.

Danny even lines out with local soccer club Lagan Harps.