GIVEN: ‘I WANT TO STAY FOR BORO FANS’ 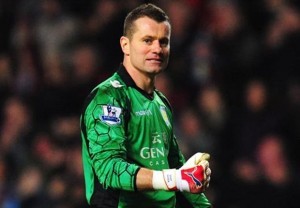 SHAY Given has six days to persuade his club Aston Villa to allow him to stay at Middlesbrough.

The Donegal man saved a penalty against today but couldn’t prevent leaders Leicester extending their lead at the top of the Sky Bet Championship.

Leicester’s seventh win in a row – the first time they have put together such a run since 1993 – gave them an eight-point lead at the top.

Vardy scored his 10th goal of the season with a close range finish in the 52nd minute and De Laet netted with a far-post header in the 73rd minute. In between times, Given saved a David Nugent penalty.

The Donegal man told The Mirror that Boro fans had taken to him – despite his previous spells with North East rivals Newcastle and Sunderland.

“I’ve been delighted to come here and play after 10 months of not being involved at Villa,” said Shay.

“It’s nice to be part of a group. The team’s done well, the spirit has been really good and we’re all looking forward to the games ahead.

“My loan’s up at the end of February and the rules are that the deal has to be done by the end of January if I’m going to stay for the rest of the season. The Boro fans have been great and it could have gone either way but if you work hard they get behind you.”