MAN WHO CRASHED INTO AMBULANCE WHILE DRUNK JAILED FOR SIX MONTHS

A man who crashed into am ambulance while drunk and while disqualified from driving for a previous offence has been jailed for six months. 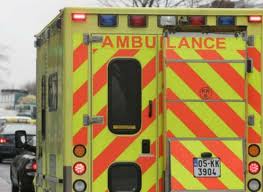 Daniel Kelly, 49, appeared before Letterkenny District Court yesterday on a range of charges relating to an incident at Illistrin outside Letterkenny on September 9th last.

Kelly was charged with drink driving, dangerous driving, no insurance, no license and the unauthorised taking of a vehicle.

Garda Inspector Michael Harrison revealed that Kelly had been in collision with an ambulance as he attempted to overtake it on the N56.

The ambulance driver revealed in a statement that he saw the lights of the car coming in his rear view mirror and as he attempted to pass he felt a jolt.

The driver stopped his vehicle and then checked on his patient and then noticed the driver of the other vehicle trying to restart it.

Kelly was arrested and was found to be over the drink driving limit.

Nobody was hurt during the incident.

Solicitor Patsy Gallagher said his client’s story was a unique one in that he had ben a successful small businessman dealing in coal and other household items until 2009.

He then bought a delivery truck for €40,000 in Drogheda but it had proven to be a dud vehicle but the company which sold it to him then went bust and he had no comeback.

Since then his money problems spiraled and he began drinking and this put considerable strain on his family.

Mr Gallagher said all his problems had been since 2009 and had stemmed from alcohol abuse.

The court heard that Kelly of Ballybuninabber, Termon had a number of previous convictions including drink driving and driving while disqualified.

He was also disqualified from driving for seven years in 2012 for driving without insurance and while having no license.

Judge Kelly thanked Mr Gallagher for his eloquent defence of the accused but said he was forced to activate the previous sentence as this offence had been committed while he was serving a suspended sentence.

“Less than a year after his last court appearance he appears on very similar charges. It is quite clear he has an issue with alcohol. I will activate the sentences on those charges,” said Judge Kelly.

Judge Kelly sentenced him to four months in jail for driving while disqualified and noted this was the fourth time he was guilty of this offence.

He also jailed him for a further four months to run concurrently for the drink-driving offence while he took the dangerous driving charge into consideration.

He also disqualified him from driving for five years.