A Fianna Fail election candidate has called on the government to make money available to the council for some very serious storm damage on the Inishowen peninsula. 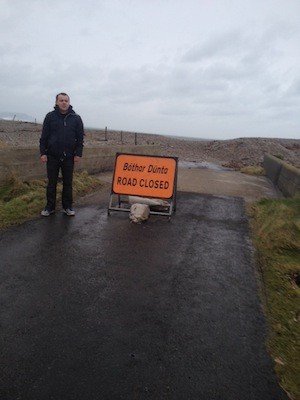 Martin McDermott at the damaged road at Malin Head.

Martin McDermott has called on the council to examine the serious road damage in the Culoort area of Malin Head where the road has completely washed away.

He was informed the road will have to be completely rebuilt as a result of the horrific storm damage in the area.

“I would hope that Donegal will get a fair share of any money that is made available from national government. This is a big issue for the local area and for the local football team.

“It is also part of the Inishowen 100 route so has great importance for the local area in bringing tourists to Malin Head.

“At lagg beach and the five finger strand sea erosion has caused major damage and will need lots of work to make the area safe. So it important that Inishowen is not forgotten when any funding is been allocated,” he said.