A student from Donegal has been shortlisted in the Bord Gais Energy Student Theatre Awards. 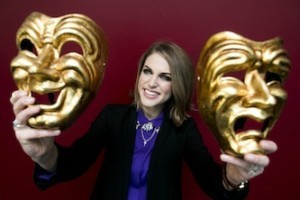 Stephen Coyle from St Columba’s College, Stranorlar, Donegal has been shortlisted for the awards.

This is the first year of the awards which have been set up by Bord Gáis Energy to encourage and reward participation in drama among school children across Ireland.

As a shortlisted student Stephen and his class have won a trip to see War Horse at the Bord Gáis Energy Theatre on Wednesday 9th April, where the overall winners will be announced at an awards ceremony after the show.

Over 7,500 students around Ireland took part in this year’s competition which focused on creative dramatic writing. Students were asked to demonstrate their playwriting skills and write a short scene based on the theme of friendship.

Commenting, Amy Huberman said: “I have been absolutely overwhelmed by the standard of entries for this year’s Bord Gáis Energy Student Theatre Awards. It was a really tough decision to come up with our shortlist and it’s going to be even tougher to select the winners! All those shortlisted should be extremely proud of themselves and I look forward to presenting the prizes to the winners on Wednesday, 9th April.

These awards have been set up to reward and encourage participation in drama in schools and, having reviewed the entries, I think we can safely say that there is a huge amount of young and emerging creative talent out there.”

Irene Gowing, Sponsorship & Brand Manager, Bord Gáis Energy said: “The response we have received from schools and students has been phenomenal with over 7,500 entries from students across every county in Ireland. Whittling it down to a shortlist has been a difficult task as there were so many fantastic entries. We look forward to meeting the shortlisted schools and students at the theatre in the coming weeks.”

For further information on the awards, visit www.bordgaisenergy.ie/schools