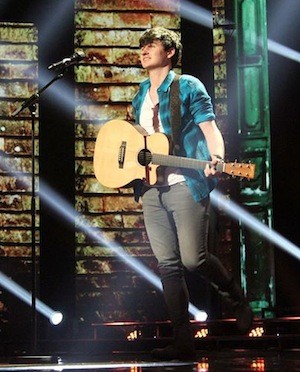 PADDY IS STILL MAKING HIS ‘VOICE’ HEARD DESPITE CLOSE CALL

Donegal singer Paddy Molloy is still giving it socks on RTE’s The Voice.

The Glenties man got a bit of a shock tonight when he didn’t get the vote from Kian Egan’s group to go through to the next round.

Not even his number one fan Jamelia could help get him over the line.

But Paddy did manage to get voted in as the outsider by the public and the judges votes.

A stunned Paddy, who had huge support in the audience, said he was simply lost for words when interviewed by presenter Kathryn Thomas.

But now that his scare as been put behind him, Paddy has promised his fans he will be upping the tempo next week on the show.

He told his Facebook followers “Wow…. Close call!! Thank you so so much for keeping me in the race!!!

“Big big week next week the gears will be up’d and I will push on!!”