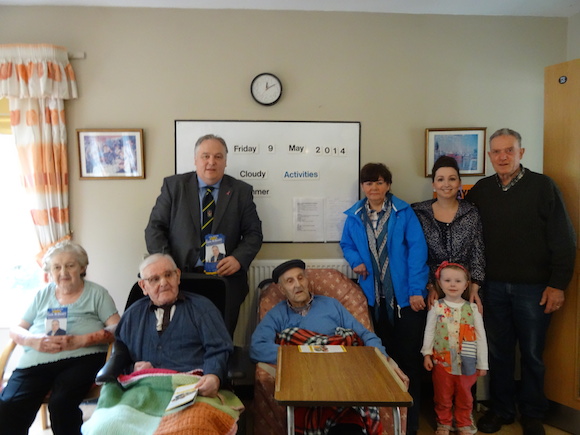 written by John2 May 11, 2014
Facebook0Tweet0LinkedIn0Print0

Independent Councillor for the Stranorlar Electoral Area Cllr Frank McBrearty has  demanded that the Health Service Executive and the Health Minister clarify the current status of Lifford Community Hospital.

Describing the current uncertainty surrounding the health unit as being both ‘reprehensible and wrong’, the Councillor has taken the decision to write to both Dr. James Reilly and HSE Area Manager John Hayes, asking both men to explicitly spell out what the future holds for the Lifford based facility.

Councillor McBrearty made his comments following a visit to the hospital where he met with both patients and staff, as well as meeting with the members of the centre’s development committee – Friends of Lifford Hospital.

During the visit, Cllr McBrearty presented the committee with a copy of the letter which he sent to both minister Reilly and Mr Hayes, ensuring the committee members that he will continue to lobby on their behalf until the long term plans for the hospital are disclosed.

Speaking of the anguish which people locally have been facing, the Councillor criticised the way in which the community has been left almost completely uninformed as to what future lies ahead for the hospital.

“The staff, the patients and the people of the Finn Valley Area have been left completely in the dark over what the future has got in store for Lifford hospital – this is absolutely disgraceful, reprehensible and wrong.”

Concerns over the hospital’s future have been high ever since a report issued and compiled by the HSE back in 2012, earmarked the facility for imminent closure, and while since then the anger and protest of locals has managed to delay this, very little has been communicated to the local community regarding the hospital’s fate.

“Action is needed and it is needed now, this is why I have taken the necessary step of writing to both Mr John Hayes of the HSE as well as to health minister Dr James Reilly,” said McBrearty

“I’m demanding that they give the people of this hospital the answers and reassurances which they no doubt deserve; this is not asking a lot.”

“The decimation of this county’s health services is nothing short of scandalous. Since 2008, Donegal’s health budget has been cut by €53M, a figure which indicates a multitude of failures, a litany of neglect, as well as the contempt which this government has shown the people of Donegal – In every sense, we truly are the forgotten county.”

Praising the excellent care which the hospital provides, as well as the outstanding commitment of the staff in the unit, Cllr McBrearty explained that Lifford Community Hospital has – for decades – served the people of the area with unparalleled vigour and professionalism, this being despite the many pressures which they are currently working under.

“Lifford hospital is the backbone of this community; the level of care which staff here provides to their patients is remarkable, especially when one considers the terrible situation which the threat of closure has created – they are a true credit to themselves and to the hospital,” said the former Mayor.

Opening up about what the facility means to him personally, Cllr McBrearty explains that one of the hospital’s longest residing patients, Eddie Gormely, is in fact a family relation of his, while the oldest member of the McBrearty family, 94 year old George McBrearty, is currently in receipt of respite care at the unit.

“My family like so many others have for generations, depended on the services which this hospital provides. This hospital has been there when we needed it; now it needs us,” he said.

Calling on all Donegal TDs from the government parties to get behind the drive to avert any attempt made to close the unit, Cllr McBrearty has called on them to be selfless, and put the interests of this community first.

“I call on all Donegal TDs, particularly those from Fine Gael, to demand that their parties commit to the safeguarding of this facility, even if that requires them to resign in protest against any decision to close it; actions speak louder than words.

“Also, what with the impending elections later this month, I would call on all candidates contesting these elections, and who are representing the government parties, to commit to abandon their party in any event that would see the demise of Lifford Community Hospital.”

During Cllr McBrearty’s visit to the hospital, members from the Friends of Lifford Hospital Development Committee also stated their distress and anger at the lack of information which they have been given in relation to what lies in store for the town’s medical facility.

“We have effectively been told nothing about what will happen to Lifford hospital and this situation has been going on for years now – it’s a disgrace.”

Criticising the lack of clarity which continues to cast doubt over the long term future of the hospital, Treasurer for the Friends of Lifford Hospital Development Committee Tony Maxwell, spoke of both the efforts of the group as well as those of the community, whom have been actively fundraising and campaigning to keep the facility open.

“We’ve already spent €140,000 on improving and updating the hospital here in Lifford, and thanks to the generosity of the people of this community, we have another €160,000 currently on hold.

“This community is fully behind Lifford hospital and the services it provides and, with this in mind, we aim to raise close to €750,000 to keep our hospital alive.”

Before leaving Lifford hospital Cllr McBrearty praised the work which has been done to date by the hospital’s development committee, and commended the people of the area for lending their support to the campaign to help retain the unit.

“Visiting Lifford hospital today has been incredibly inspiring. The hard work and determination of this community, as well as those I’ve met with here, is something from which we can all take much needed comfort and solace.

“Since being elected to council back in 2009, I’ve been extremely vocal about the need for Lifford Community Hospital to be supported and protected, both now and long into the future.

“I hope that from my correspondence with the minister and with the HSE Area Manager, that perhaps some light may be shone onto what exactly is planned for the hospital. Furthermore, I hope that both men see the crucial role which Lifford hospital plays in this area, as well as realise that this facility is indeed the pillar of the community here.

“While I am now awaiting an official response from them, I commit to giving whatever assistance I can to this hospital, as well as to the many that so desperately depend on the care which it provides.”