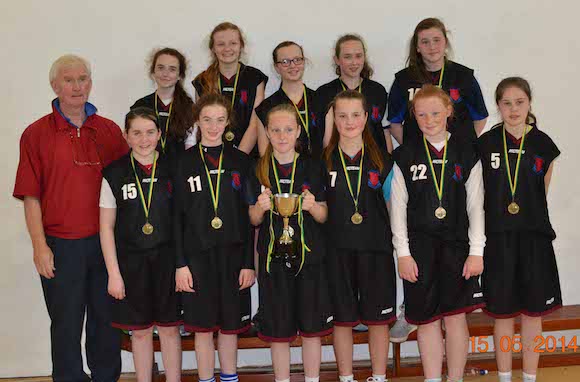 It’s been a record breaking year for the young basketball players of Glenties Comprehensive School. Last week their 2ndyear boys and girls teams completed a double in the FolensCounty Schools League when the travelled to PCC Falcarragh and won both Finals against strong PCC opposition. The girlsfinal in particular was a memorable affair with both teams pushed to their limit for the duration, Glenties winning the day by a single point margin.

This week it was the turn of their 1st Year boys and girls teams who had also both qualified for their respective finals in theFolens League, this time against Colaiste Ailigh, Letterkenny. Again Glenties emerged victorious but this time the boys final was a real cliffhanger with Glenties once again just about holding on for a one point victory.

This was a low scoring, brutally defensive encounter with the smaller Glenties lads put to the pin of their collar with the well organised Letterkenny lads. It was 6 points each at half time with the lion hearted Jonathon Mc Hugh scoring 2 of the Glenties baskets and Brian Mc Laughlin replying with 2 forColaiste Ailigh.

The second half was equally close with neither defence giving an inch. Danny Gallagher was the man for Glenties with 3 great scores while Sean Brown, Sean O Rian and McLaughlin again scored for the Letterkenny side. In the end it was a free throw expertly converted by Peter Bennet that was the deciding score and gave Glenties a County title by the narrowest of margins.

For Glenties captain Calum Malley was a star performer while big Brian McLaughlin was always a huge threat for ColaisteAiligh./

The Glenties girls led 7 points to 2 after the 1st quarter but whatever coach Siobhan Lynagh said to her charges at the interval had the desired effect and Colaiste Ailigh came out to play their strongest period and this was enough to lead at half time by 1 point 8 to 7. Aoife ni Chiarain scored two great baskets during this phase. Glenties starting 5 came back on in the third quarter and proceeded to dominate affairs with the silky skilled Danielle McDevitt to the fore. Colaiste Ailigh had no answer and a great defensive display in the last quartersaw Glenties deservedly take the title. For Glenties, Sarah Harkin, Shauna Quinn, Danielle mcDevitt, Leah McInnes and Orla McGuinnness stood out while Grace Ni Earcain, Niamh Ni Annagain and Aoife Ni Chiarain were impressive for Colaiste Ailigh.