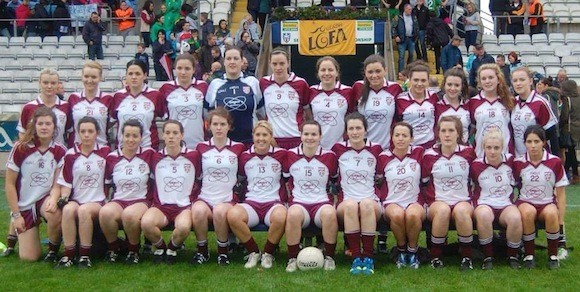 Geraldine Mc Laughlin will be missing as Termon Ladies aim for a unique Donegal GAA record, when the Termon Ladies side travel to Moycullen, County Galway at the weekend to participate in the 2014 All Ireland Gaeltachta finals for the fifth time.

Termon Ladies who will be defending their All Ireland crown are travelling into the heart of the Galway Gaeltachta knowing that the tag of defending champions carries with it an expectation of success from the travelling support from this rural Club based in the heart land of the birth place of St Colmcille, without the services of Geraldine Mc Laughlin.

McLaughlin along with Dara Kelly will be missing both having undergone surgery in the past few weeks.

Termon Ladies who have been to the forefront of success in Ladies football in Donegal for a long number of years has tasted success at Ulster level in 2010 when the mighty Donaghmoyne Ladies were shell shocked into submission at Beragh Co Tyrone by a late Roisin Friel goal for Termon to lift the Ulster ladies crown.

Termon who are backboned by custodian Laura Gallagher, the Mc Cafferty sisters and cousins Roisin and Grainne mc Cafferty have also the Mc Laughlin sisters, Jimmy Lee Murray, and Emer Gallagher all make up a formidable experienced team.

Now that Geraldine Mc Laughlin is ruled out for several months the evergreen Maureen O’Donnell who in the Donegal Gaeltachta final teased and tormented the Glenfin defence before lifting the Radio Na Gaeltachta cup in the Donegal finals will surely be to the fore if the maroon and whites of Termon is to lift the All Ireland Gaeltachta cup for an unbelievable fifth year on the trot.

The first victory was a memorable one over old rivals Glenfin after extra time in Belmullet Mayo in 2010, next was in the All Ireland final played in Falcarragh when St Marys Belfast were the opposition in 2011.

When spoken too earlier this week Danny o Donnell Chairperson of the Termon Ladies spoke about the dedication, determination of this Termon Ladies team.

He spoke about the manner in which this group of Girls first started winning at under age and then progressed to the County, Ulster and now the National arena.

O’Donnell also paid tribute to Harry Mc Glynn Seamus Friel and Christy Gillispie and to all the parents who over a long number of years facilitated the club with taking players to games and training.

In the times when voluntary workers are scarce and everyone seems to be so busy we here in the Termon Club are so proud of our fine tradition of being at the Top of the sporting word in Ladies football. O Donnell added that this team has made Termon proud and indeed placed Donegal Ladies football on a high pedestal.

Deirdre (Galligan) Gallagher who is just recovering from a tough election campaign was a playing member of the Termon club and a past Chairperson or the Ladies board, stated

“We have so much good will in the club, I played for the club in my earlier days and I now have a daughter Anna on the playing panel we have a lot of second generation players coming on stream.

Deirdre also praised the people in the club who do so much voluntary work to provide the Club with the resources that such a successful team needs.

Under the guidance of Trevor Alcorn, Francie Friel and Paul Mc Daid Termon will be hoping for an injury free weekend.