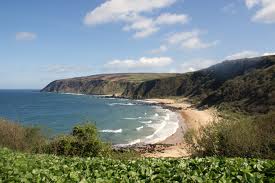 Residents in Kinnego are angry

ANGRY residents along one of Donegal’s most spectacular strips of coastline say part of the Wild Atlantic Way will be “ruined” if plans for massive turbines go ahead.

Two turbines have been given the go-ahead overlooking Kinnego Bay in Inishowen, the site of a Spanish Armada landing.

Donegal County Council has vigorously opposed the turbine plans – but they have been given the go-ahead by An Bord Pleanala. Council officials complained the turbines would ruin the vista along the Wild Atlantic Way.

Having been given planning permission, Derry man Declan Clarke wants to increase the height of the turbines to 132 metres.

Opposing the plans a council official wrote that it was council policy “not to permit development proposals which would detract from the visual quality/amenity on either the approach roads to, or views to be had from significant tourist attractions.”

“This is one of the most beautiful parts of the Wild Atlantic Way,” said residents’ spokesman David Simpson.

“It is a national scandal that turbines will now overlook not just Kinnego but the beautiful Long Glen on the approach road to it.

“I can’t believe that anyone visiting our lovely wee part of Donegal would want to see these monstrosities,” he said.

Mr Clarke said in his submission during the planning process: “It is not considered that the purpose of the Wild Atlantic Way is to sterilise all lands from future development along the western coastline of Ireland from Donegal to Cork and all places in between.”

Mr Simpson praised the council for opposing the plans.

“They took a stand and unfortunately lost,” he said.

“If these turbines go ahead, there is nothing to stop them appearing along the rest of the route being taken by tourists. It’s incredible.”