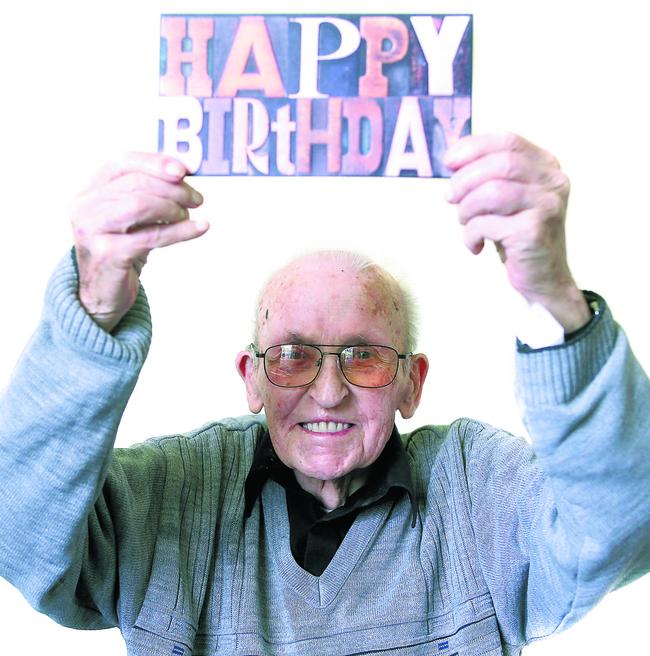 Donegal native Fr Ambrose O’Gorman survived bombing raids during the second World War and a terrifying plane crash in 1960, but this week the popular cleric celebrated his 102nd birthday.

The Kilmacrennan native still enjoys attending mass in St. Patrick’s Churches in Ballyshannon and Belleek. Despite his close brushes with death, the much loved priest celebrated turning 102 with a brilliant birthday bash in Shannagh Nursing Home in Belleek.

Fr Ambrose was born in Kilmacrennan. Once he was ordained he spent most of his time as a priest for over 40 years mostly in Essex. He was attached to parishes in Chelmsford, Basildon and lastly, as Parish Priest in Newbury Park.

“We had a shelter in the house and I once hid under a chair with my beads and saying the Rosary.

“I worried a lot then, we hardly discussed it among the priests but I do remember saying I was never going to learn German.

Fr Ambrose also recalled the terrifying moment he cheated death, when the plane to Dublin he was travelling on crashed and burst into flames.

On January 7, 1960, Father Ambrose had a miraculous escape he and 58 passengers and crew were aboard a British European Airways flight from Dublin which crashed in dense fog at London’s Heathrow Airport.

“I remember a loud bang and just before the crash nudging the man beside me.

“I asked him what was wrong but he was a dreadful colour, so I didn’t ask any more questions.

“The plane burst into flames, but we all managed to get safely off.

“All I had was the new suit from Clery’s that I was wearing, and my breviary, because I had been praying.

“The fog was so bad that it took them more then two hours to find us, even though they had spotlights.

“We were all huddled in little groups and had to shout so that they could locate us.

The special milestone was celebrated at Shannagh Private Nursing Home in Belleek, where the ‘remarkable’ figure has lived in recent years.

Marking his birthday celebrations quietly with staff and residents, his 102 years were marked at a special mass. Among those to join Fr. Ambrose were priesthood friends from Ballyshannon.

The Rev. Fr. Cathal O’Fearrai, Ballyshannon was the main celebrant and other clergy took part before the priests joined him for tea.

Fr. Ambrose served as a priest for over 40 years mostly in Essex where he was attached to parishes in Chelmsford, Basildon and lastly, as Parish Priest in Newbury Park.

Having returned to Ballyshannon on retirement, he moved around eight years ago into Shannagh Private Nursing Home, where he is ‘good form’.

Described as a “remarkable” man, who is “very independent,” Fr. Ambrose is also acknowledged for his “very good memory”.

A staff member at Shannagh mentioned yesterday that “he never forgets anything” and that he has a powerful memory!

He loves getting cards and meeting people, she said, adding that he “loves visiting people and people visiting him.”