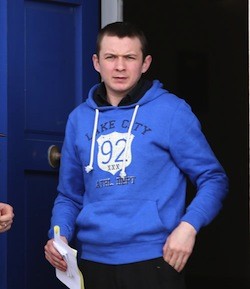 A Judge has asked Gardai to find out the full cost of a spate of glue attacks on homes and cars across the county.

His arrest follows months of attacks on the homes and cars of pensioners and other homeowners at locations across Letterkenny in recent months.

McElwaine, from Buncrana, faces a total of 29 charges of criminal damage on at least ten different occasions between September 2012 and May 2013.

Garda Stephen Moyles told the court that Gardai were still assessing the cost of the attacks.

However, he revealed that one woman had to pay more than €800 after the locks on her car were filled with glue.

The final cost of the attacks is expected to run to several thousand euro.

On one occasion more than 20 homes at Ballymacool Terrace had their front doors filled with glue.

A local locksmith came to the rescue of the homeowners by offering them a deal to replace the locks.

Judge Paul Kelly said he wanted a full costings of the damage caused before he dealt with the case.

He adjourned the case for hearing until September next.