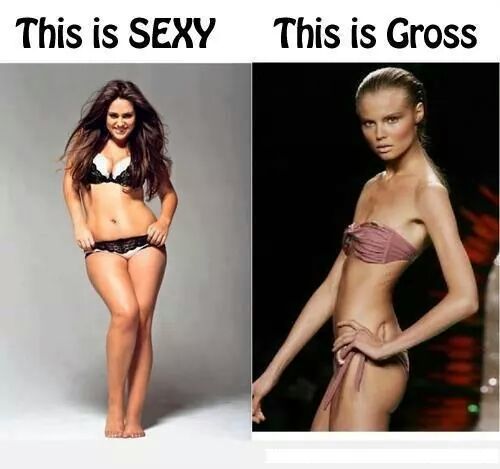 By Emmet Rushe: What did you think when you saw the picture above?

Did you agree with it?

Did you think it was appalling towards the thinner woman?

Did you think, ‘Skinny Bitch’?

Do you agree that the woman with the fuller figure is sexier?

Do you really think that the thinner woman is ‘gross’?

This picture came up on my news feed on Facebook on Saturday night.

It was posted by a person in the fitness industry and the picture to date has over 600 thousand likes.

Let that sink in for a moment, 600 thousand people seem to think that the thinner female is ‘gross’

What does that say about the people who liked the image?

If it popped up on your news feed would you have ‘liked’ it also?

Personally, I find the image and the message it is sending out absolutely disgusting.

The fact that a supposed fitness ‘professional’ posted this up on their timeline and agrees with it is even worse.

What sort of message is he sending out to his followers?

It’s ok to be ‘in shape’ or ‘curvy’ but if you are underweight or skinny you are ‘gross’ and can be ridiculed for it?

What if the image was posted with the message the other way around?

What if it was ridiculing the ‘curvy’ woman as being ‘gross’, do you think the image would have 600 thousand ‘likes’?

I doubt it; in fact I would hazard a guess that there would be a lynch mob out for whoever would have posted it.

But if you are skinny or underweight it is fine?

Is it because people who are underweight have never had the burden of being overweight?

Is it because if you are naturally thin you are ‘lucky’ and should ‘shut up’ when you complain about not being happy with your shape?

After all, what could you possibly have to complain about?

You can eat anything you want and not put on weight you lucky bitch!

Because not being able to put on weight is a good thing, right??

If you look at the image of the curvy woman and take out the way she is standing.

If we take out the good lighting that is casting the right shadows and if she was standing straight on in natural lighting with her hair tied back, what would you see?

Would you still see a ‘sexy’ woman or would see a woman who, on the BMI scale is clearly overweight; she is as overweight as the other female is underweight.

Would you agree with that?

Am I allowed to say that?

Am I allowed to point out that someone is overweight?

But it is alright to point out when someone is underweight?

Neither is all right.

It’s no different, no matter how you look at it.

It should not be socially acceptable to point out anyone’s weight or body shape to them no matter what their size is.

There shouldn’t be double standards when it comes to body image.

Do not let anyone ridicule you or put you down about your body, they have no idea why you are the size or shape you are or what your journey has been to end up there.

In fact, it’s none of their damn business.

If you have any question on this article or for getting a tailored program to help you reach your weight loss/weight gain goals, please contact me through the link below.