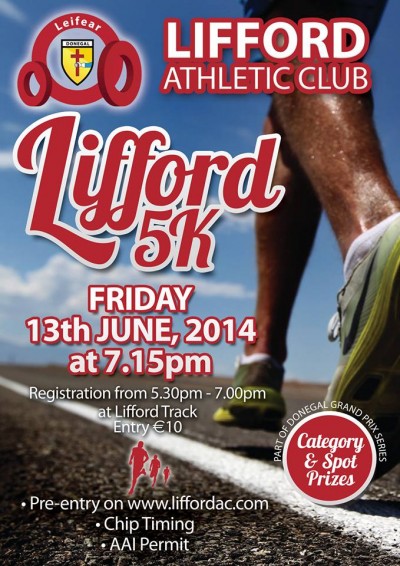 The 13th annual Lifford 5K Road Race and Walk will be held this Friday evening 13th June with a start time of 7.15pm.

This race is one of the longest established on the Donegal Grand Prix circuit and has traditionally attracted some of the biggest fields of athletes from the elite level through to the recreational runner.

The circuit is one of the few town centred races on the Grand Prix circuit with the narrow streets and numerous viewing vantage points guaranteeing an excellent race atmosphere.

The popularity of this race has been evident since its inception in 2002 with large numbers taking part and growing year on year.

Clearly then, the Lifford race is one of the key races that athletes make a point of attending and has been a happy hunting ground for fast times and personal bests.

Last year, the club had an added feature of a Team Prize with the first four from each club to score.

The inaugural holders of the perpetual shield are the mens City of Derry Spartans and the Finn Valley womens teams who are not expected to give up their titles without a fight again this year.

Lifford AC has been consistently striving for the best possible race experience for participants and yet again, there will be prizes for Seniors and Juniors as well as Masters categories for 35,40,45,50,55,60 for both men and women and spot prizes for all race participants.

Chip timing will be an added feature yet again this year, along with changing, showers, parking, First Aid, post race water station and refreshments, as well a warm up track and port-loos at the start line.

A fast course, the route has been certified for its accuracy and the race holds a current AAI permit.

With the country enjoying a running boom at present and Fit 4 Life and Couch to 5K groups springing up everywhere, the numbers taking part tomorrow evening are expected to swell even further.

As a result, athletes are encouraged to pre enter on liffordac.com and arrive early on the race evening. Registration on the evening and number/chip collection will be at the athletic track from 5.30pm and will close at 7pm, the race starting on the Letterkenny Road at 7.15pm sharp.