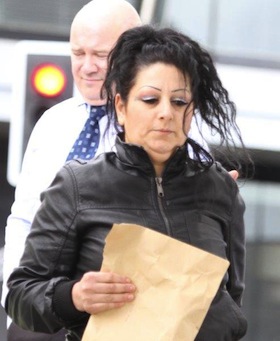 Florea Mihaela, aged 34, who was charged with prostitution. She had almost 6k in cash

GARDAÍ have carried out more searches in a crackdown on Romanian crime gangs operating in Donegal.

It follows the shutting down of three brothels operating from the same apartment block in Letterkenny in the early hours of yesterday.

Six people – four of them prostitutes – appeared in court as a result of an extensive Garda operation.

The four will fly out of Ireland on a 7.30am flight from Dublin to Budapest tomorrow morning, funded from cash seized by Gardaí.

But Donegal Daily can reveal that investigations are continuing into a Romanian mafia gang in north Donegal involved in a range of criminal activities including prostitution, drug dealing, theft, people trafficking and money laundering.

One search even took place just yards from where yesterday’s court case was taking place.

Gardaí swooped on a car parked near Letterkenny court house as cases continued inside.

Two men were searched whilst their car was “taken apart” during the operation. They were held for a time and investigations are continuing.

“Gardaí seemed to appear out of nowhere,” said one witness.

“The next thing I know they are going through this car like forensic experts, checking everything.”