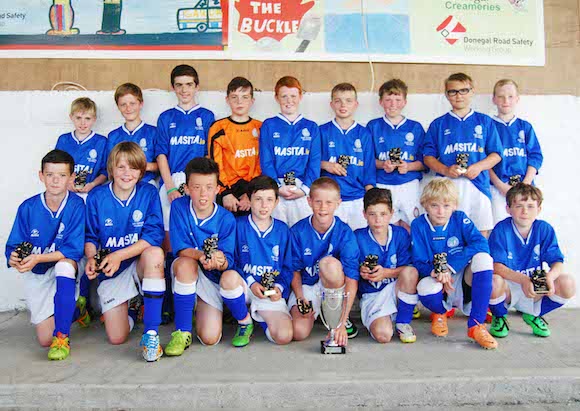 South Donegal (Finn Harps) won the Finn Harps Cup for the second time in the competition’s 3 year history. The two day tournament which began in 2012 is used as a preparatory competition for sides entering the Foyle Cup.

The competition started on Friday evening with South Donegal facing Sion Swifts. A mix of impressive attacking and confident finishing helped South Donegal towards a comfortable 6-0 victory. This was followed by Swilly Rovers playing East Donegal and the Ramelton side overcame their counterparts in a tight encounter.

Day two of the competition opened up with South Donegal taking on East Donegal and although a well organised East Donegal team were solid in defence, South Donegal managed to force through to a 3-1 victory, Joe Campbell with the pick of the goals. Sion Swifts faced Swilly Rovers in the competition’s fourth game. A good start from Sion Swifts was quickly calmed by Swilly Rovers possession and clinical passing as Sion were powerless to stop Swilly’s attacks leading to a 5-1 win.

This set up a grandstand finish to the tournament as the top two sides were to meet each other in their final game. The two sides served up a thoroughly entertaining though equally nervy contest as both looked to play free flowing football, however, both goalkeepers were on hand with important saves as the game finished in a stalemate.

That result saw South Donegal claim the tournament victory, with Swilly Rovers confirmed as runners-up. This left just the 3rd and 4th positions to be decided between East Donegal and Sion Swifts. Although East Donegal took the lead midway through the first half, a well executed free kick from Sion Swifts gave them an equaliser in the second half as the competition finished with a 1-1 draw.