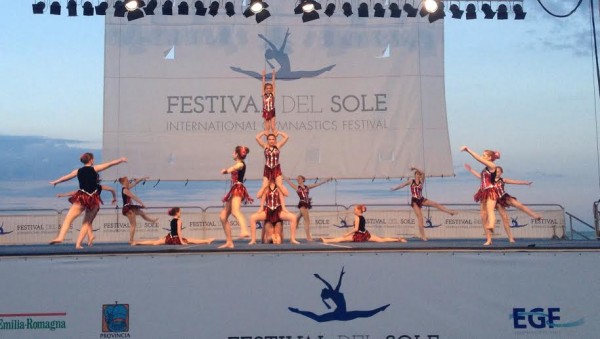 The Finesse team along with gymnasts from Dublin had the honour of being only the second ever Irish team to take part in this event.

All the colours of the world of gymnastics performed at the Festival del Sole: almost 4,800 non-professional gymnasts took part in the Opening Ceremony with a Grand Parade. The gymnasts march behind their nations flag from four different arenas through the beautiful streets of Riccione, eventually the teams arrive at the main arena the Piazzale Roma where the ceremony finishes’ with a huge firework display.

Day one saw the Donegal Team perform alongside Austria, San Marino, Israel, Italy, and Portugal. They showed no nerves as they took to the floor and delivered a perfect performance in front of a huge audience.

Day two the team performed with Belgium, Finland, Denmark, Switzerland and Lithuania after the highs of the first day they again delivered an outstanding routine which received a great reaction by the huge crowd with even the compare saying “Irlanda bellissimo” a saying that the team were getting used to hearing.

That set the trend what was to be a wonderful week for this Donegal team as they executed the routine with precision and grace which was well received by the huge audiences.

All of their hard work paid off as on Friday before the closing ceremony they were presented with gold medals from their Head of delegation, Carolanne Tighe from Irish Gymnastics for their achievement. The Finesse team were delighted with their achievement as for many of them this was their first international event representing Ireland, but hopefully not their last.

Love for the sport, desire to meet with other gymnasts, and perform in front of a huge audience these simple ingredients multiplied by the 4,800 athletes of all ages and from all over the world will live long in the memory for these young girls. They have not only done their club and county proud they have also done Irish gymnastics proud. In the words of the Italian compare “Irlanda Bellissimo” LOVELY IRELAND.