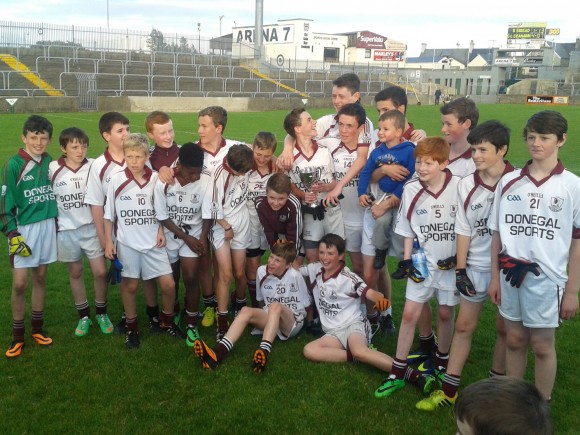 GAA NEWS: ROSS MARLEY THE STAR OF THE SHOW FOR GAELS U14’S

U-14 Division 2 Northern Board Championship Final.

Letterkenny Gaels came from behind to win the Division 2 Northern Board Championship on Friday evening last in Ballybofey.

Having trailed for the entire match to a well drilled Robert Emmets team, Gaels eventually ran out winner on a score line of 4-07 to 1-13.

Ross Marley was the herofor the Gaels scoring a sublime goal to put the Letterkenny men into the lead by two points for the first time with six minutes remaining and converting a ’45 in the dying minutes to secure victory on an evening when the Gaels were on theback foot for most of the match.

Marley opened proceedings scoring the opening point but Corrie Lee Bogan playing at centre half forward for Robert Emmets was causing problems for the Gaels back line. While Junior contained him well for periods of the game, whenever he won possession scores usually followed.

Fortunately the Gaels defence forced him into shooting for points and throughout the game only conceded one goal in the second half.

Mickey Sweeney scored a goal after a fine solo effort in the first half to leave Gaels trailing by 1-03 to 0-09 at half time.

The introduction of K Patton at the start of the second half at centre half forward gave the Gaels some additional aerial power and helped turn the tide.

It was Robert Emmets who started the brightest and scoredtwo quick points and a goal, while a point from the Gaels left the score 1-11 to 1-04 in favour of Emmets before the Gaels slowly started their fightback.

D Cahill was beginning to forage deep into his own half and made several of his own solo attacks.

K.Patton drove from the half-back line with a fine pass picked out by R Frain who in turn laid off a pass to D Cahill and crashed the ball to the back of the Robert Emmetts net and narrowed the gap.

R Marley scored the next goal and then with just under six minutes to go Marley won another ball and scored the goal which left that Gaels leading by two points.

Gaels won the ensuing kick out and had another goal chance blocked for a ’45 which Marley converted and ensured that Gaels lifted the cup.

Letterkenny Gaels showed great commitment and never dropped their heads and eked out a win against all the odds on the day.

Congratulations to Corrie Lee Bogan (Robert Emmetts) who was the deserving winner of man of the match.

Next up for the Gaels is the county semi final on Sat 12th venue and opponents to be confirmed.

GAA NEWS: ROSS MARLEY THE STAR OF THE SHOW FOR GAELS U14’S was last modified: July 7th, 2014 by Stephen Maguire