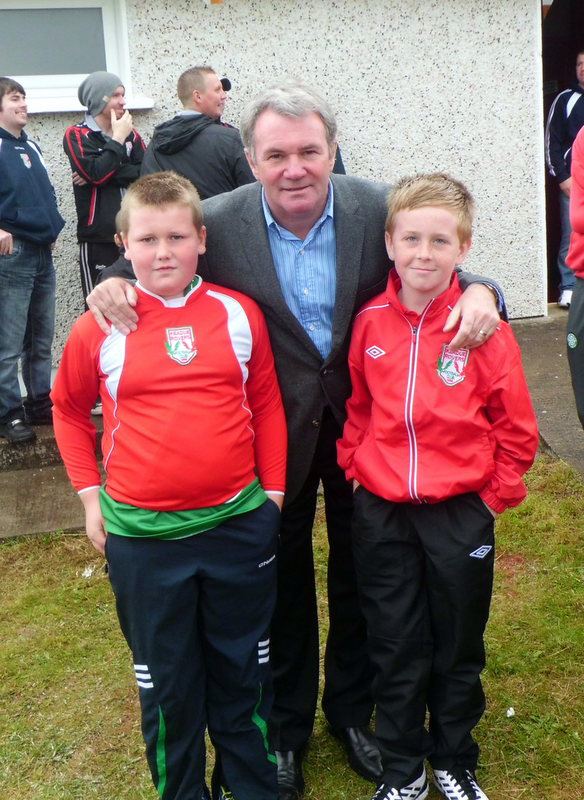 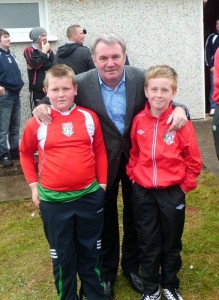 Ray Houghton pictured with Keadue Rovers underage players when he visited the county in 2012.

Former Irish World Cup hero Ray Houghton, revered for scoring that memorable goal against Italy in the Giants Stadium in New Jersey has been sent home from the World Cup in Brazil after falling ill.

Houghton was born in Glasgow and grew up there, but he qualified to play for Ireland because his father was born in Buncrana.

Houghton was in Brazil for RTE as part of their team which is currently covering the 2014 World Cup.

Houghton works as a pundit and as a commentator for RTE, and was due to take his place in the gantry along with seasoned commentator George Hamilton for the quarter-final clash between Costa Rica and Holland.

However, just hours before he was set to commentate on the match, Houghton was rushed to hospital after being struck down by the mystery illness.

Once medics gave him the green light to fly home RTE chiefs made emergency arrangements to fly Houghton back to the UK.

It is believed that Houghton suffered hypertension, which is a major cause of stroke and heart attacks.

Houghton visited Donegal in 2012 and toured the county visiting a whole host of junior and intermediate clubs in Donegal.