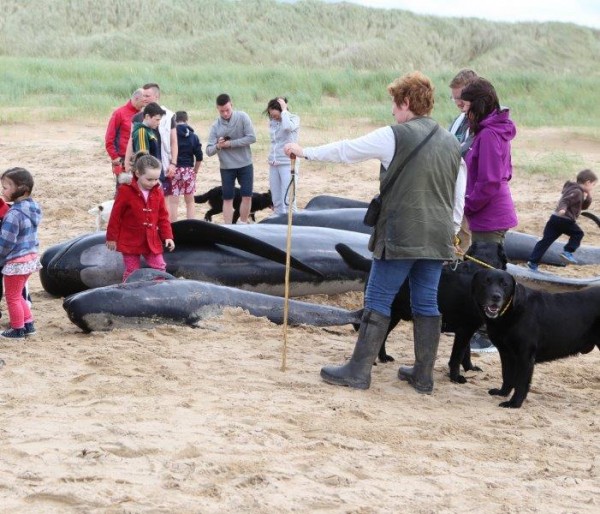 EXPERTS WARN PUBLIC TO STAY AWAY FROM DEAD WHALES

The public have been warned not to touch the carcasses of the whales which stranded on a Falcarragh beach yesterday.

Dave Duggan, regional manager of the Irish Parks and Wildlife Service told Donegal Daily that they simply do not know what the Pilot Whales died from.

He warned “I certainly would not allow any of my staff to touch these animals without protective clothing on them.

“We simply do not know what they died from and until we do I would be advising people to stay away from them.”

Some of the Whales were re-floated to the water at Ballyness Bay. pic copyright nwnewspix

Hundreds of people posed for pictures with the dead whales yesterday while children climbed on their backs.

However, no guidance was given on scene to people and the area was not sealed off.

A team from Donegal County Council is expected to arrive at Ballyness Beach today to assess the situation and to work out how to dispose of the large corpses.

Thousands of people descended on the beach yesterday causing major tailbacks as locals tried to save the whales.

But despite TWO successful rescue bids, a number of the whales have now beached and died.

Mr Duggan said he appreciated that people were only trying to save the creatures but he said it was best all around if they were now left alone.

“I know people have good intentions but this is nature and this is what these animals do. It happens all the time.

“I would appeal to people to stay away from this area and allow nature to take its course.

“I would also ask people not to touch the whales. They are on the beach for a reason – because some of them are sick,” he said.