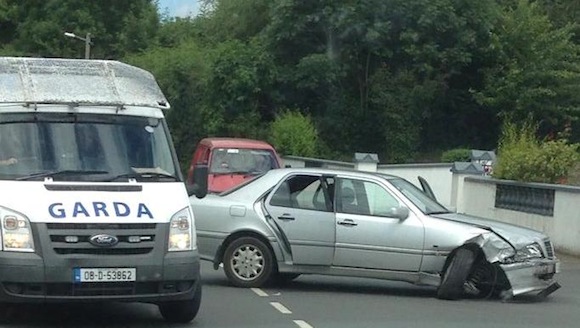 The car involved in the incident in Castlefin yesterday.

Four men are to appear in court today following yesterday’s chase in which a Garda car was badly damaged.

The men, who are understood to be from Northern Ireland, will appear at Buncrana District Court.

The men were arrested yesterday afternoon near Castlefin following a Garda operation.

It followed an operation in which Gardai put out appeals on the movements of a silver Mercedes car.

The car was observed and a pursuit took place.

The men were arrested in a follow-up operation which also involved the co-operation of he local community.

The men were taken to Letterkenny and Milford Garda stations for questioning overnight.

They will appear before Judge Paul Kelly today.