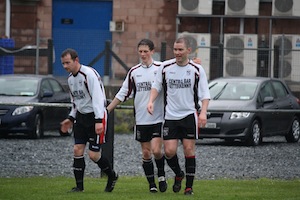 Darren McElwaine will be hoping he can be a cup final hero tomorrow night.

Old adversaries Letterkenny Rovers and Swilly Rovers meet head on tomorrow evening in the final of the Knockalla Caravans Cup.

On paper it’s a mouth watering clash with a whole host of ex LOI stars on show for both sides.

The bitter rivals will be desperate to claim silverware with both sides out of contention to win the USL.

While both sides will also meet each other in the semi-final of the Donegal News League Cup later this month.

Both sides have strengthened their squads in recent weeks, with Letterkenny acquiring the services of former Harps man Johnny Bonner.

Laurence Toland has been hugely influential for the Ramelton men and he will be a key player on Saturday night.

Letterkenny defeated Finn Harps 5-0 on Sunday, with new signing Johnny Bonner scoring twice, Trevor Scanlon will be hoping he can be the difference for his side on Saturday.

Letterkenny have vast experience in their ranks with Darren McElwaine and Jonathan Minnock, but Swilly can also call on the wily Michael McHugh who at 42 is still a quality operator who can unlock any defence.

It promises to be a cracking final, kick-off for this one is at 7pm at the Dry Arch in Bonagee.

OLD FOES LETTERKENNY AND SWILLY CLASH IN WHAT PROMISES TO BE A CUP CRACKER was last modified: July 11th, 2014 by Mark Forker